LA Ban Could Spell End For The Plastic Bag

Environmentalists believe a ban in the city of 4 million will have a huge impact and could even influence the rest of the country to follow suit. 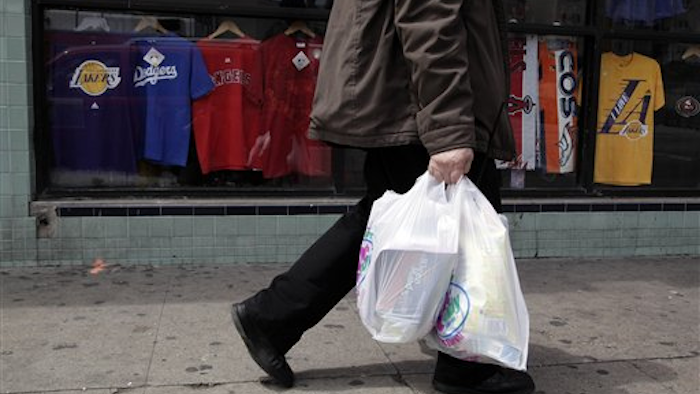 A man walks along the street with plastic bags in Los Angeles, Thursday, May 24, 2012. Now that the city of Los Angeles has taken the first step toward banning plastic bags, it appears the little utilitarian bags themselves may be headed for the trash heap of history. (AP Photo/Jae C. Hong)

LOS ANGELES (AP) — Ah, the little plastic grocery bag, we hardly got to know you.

Although it seems as if the single-use grocery bag, as it's formally known, has been around forever, it wasn't until 1977 that it was introduced to U.S. supermarkets, a move that prompted perhaps the most asked question of the following decade: "Paper or plastic?"

As the years went by and plastic won, people began to find myriad other makeshift uses for the little bags with the briefcase-like handles. You could line small trash cans with them, use one to scoop up dog doo and another to carry wet towels home from the beach. You could even use them to take pictures in the rain and not destroy your camera.

The discarded bags, though, had a nasty habit of washing up on beaches by the thousands, clogging storm drains and getting tangled in all sorts of stuff. That raised the ire of environmentalists, who have been on a ban-the-bag quest for years.

Now, with the city of Los Angeles taking the first step toward joining nearly four dozen other California municipalities in outlawing them, the humble little polyethylene bag may be headed for the trash heap of history.

But LA, with nearly 4 million residents, goes through an estimated 2.7 billion plastic grocery bags a year, according to city officials, and environmentalists believe a ban here will have a huge impact and could even influence the rest of the country to follow suit.

"This is a gateway for sustainability," said Leslie Tamminen of the Clean Seas Coalition, which pushed for the LA ban. "This is meant to change consumer behavior and expand consumer consciousness."

So, using those handy little bags with the tie-shut handles for cleaning up after your dog or cat? Forget about it.

In Santa Monica, many people say they already have.

"I've had to buy a lot more of these," laughed Dana Artress, pulling a little green pet-store doggie bag from her pocket as she walked her longhaired Chihuahua through Pacific Palisades Park.

Santa Monica banned the use of plastic grocery bags more than a year ago, as did Los Angeles County for its unincorporated areas, which is where Artress lives. And although she misses her free bags, she figures it's a small sacrifice to make for the environment.

"Plastic has done a lot of good things," she said. "But I don't think we absolutely need it just to pick up our dog poop."

Indeed, every dog walker, jogger or bicyclist who stopped to talk about plastic bags on a recent sunny afternoon in the park that overlooks the Pacific Ocean agreed wholeheartedly with her.

Oh sure, most of them admitted, they've forgotten their reusable bag. They've had to fumble with paper ones, which cost them a dime apiece. Some even precariously juggled their purchases free hand on the way back to the car.

But the tradeoff, they say, was worth it.

"We used to see just so much plastic bags and trash on the beach," said David Schwartz of Santa Monica as he sat on a blanket overlooking the ocean with his wife, Jennifer, and their baby.

Schwartz's best use for his grocery bags was collecting the discarded food that winds up in your kitchen sink.

The bags have also been known to be handy for carrying baby bottles and for stashing dirty diapers until you find a trash can. But Schwartz says he's found freezer bags serve the same purpose and don't seem to blow away in the wind, get tangled in trees or power lines or stuck in storm drains like grocery bags do.

The biggest thing now is remembering to bring those reusable cloth bags to the grocery store that he and his wife have collected since the plastic ban began.

"I'm still not used to it, I always forget," Jennifer Schwartz acknowledged.

Under the proposal the City Council approved last week, Los Angeles will conduct an environmental impact study to see just what effect banning plastic grocery bags might have.

Then it will look at adopting a ban similar to Santa Monica's, which would allow people who forget to bring their reusable bags to the store to buy paper ones for 10 cents apiece.

No time frame for all that was given, prompting industry officials who oppose the ban to note it's still a long way from happening, and that they will argue that it would be a job killer for California while not significantly cleaning the environment.

Mark Daniels, chairman of the industry group the American Progressive Bag Alliance, says the plastic bag manufacturing and recycling business employs more than 30,000 U.S. workers, including about 2,000 in California.

Meanwhile, bans have begun to be adopted elsewhere. Every county in Hawaii has now banned plastic grocery bags, although all the bans won't fully take effect across the state until 2015. The bags have also been banned in Portland, Ore, and in the Outer Banks region of North Carolina, although there is an effort under way in that state to repeal the ban.

People who feel they just can't survive without having a plastic grocery bag to entertain a cat with or slide over a broken parking meter could still obtain one by going to a takeout restaurant.

Unless, that is, they live in Malibu.

The bags have been banned from restaurants there too.