With most of its 137 million objects kept behind the scenes or in a faraway museum, the Smithsonian Institution is launching a new 3D scanning and printing initiative to make more of its massive collection accessible to schools, researchers and the public worldwide. 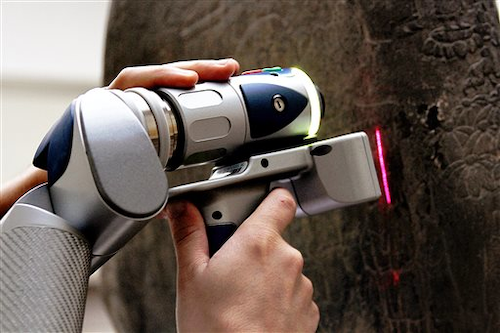 WASHINGTON (AP) -- With most of its 137 million objects kept behind the scenes or in a faraway museum, the Smithsonian Institution is launching a new 3D scanning and printing initiative to make more of its massive collection accessible to schools, researchers and the public worldwide.

A small team has begun creating 3D models of some key objects that represent the breadth of the collection at the world's largest museum complex. Some of the first 3D scans include the Wright brothers' first airplane, Amelia Earhart's flight suit, casts of President Abraham Lincoln's face during the Civil War and a Revolutionary War gunboat. Less familiar objects include a former slave's horn, a missionary's gun from the 1800s and a woolly mammoth fossil from the Ice Age. They are pieces of history some people may hear about but rarely see or touch.

Now the Smithsonian is launching a new 3D viewer online Wednesday to give people a closer look at artifacts in their own homes. The data can also be downloaded, recreated with a 3D printer and used to help illustrate lessons in history, art and science in schools. While some schools might acquire 3D printers for about $1,000, other users may examine the models on their computers.

"Historically, museums have just tried to push data out. It's been a one-way street," he said. "Now museums are really rethinking their relationship with their audience, and they're trying to empower their audiences to help them along whatever learning journey they're on."

With the cost of 3D scanning and printing equipment declining in recent years, Waibel said there's a new opportunity for museums to transform how they collect, curate and conserve artifacts and also how they educate. Three-dimensional models can help tell stories and create more engaging lessons, he said.

Smithsonian educators are building interactive tours to view 3D models online. On the Wright Flyer aircraft from 1903, they have created hotspots to help explain its engine and wing design, and the user can rotate the object in all directions for a closer look.

With the Lincoln masks, the 3D viewer allows the user to adjust lighting levels to see the aging of the president's face over the course of the war. And a 3D scan of a Chinese Buddha statue allows the user to examine and unravel a story carved in its surface.

So far, the Smithsonian is devoting about $350,000 annually to 3D digitization, with companies also donating equipment. But museum officials are working to raise $15 million going forward to move the 3D lab from a suburban warehouse in Maryland to a new innovation center planned for the National Mall. There, the public could see some of the latest 3D technology and even make their own 3D prints of museum objects in a "maker lab." Within minutes, a 3D printer can create a plastic replica of an object by reproducing the digital model layer by layer.

It's not clear how long it will take to create a large 3D collection. The pace will depend on funding and scaling up techniques the 3D lab has just begun creating, officials said. For other digitization efforts, the Smithsonian has engaged private partners and may even recruit volunteers to help.

Smithsonian Secretary Wayne Clough has made digitization of artifacts a high priority since he arrived in 2008, but only more recently has 3D scanning and printing become affordable. In an interview, he said museums face a greater challenge than the digitization of documents in libraries or archives because museum artifacts are often three-dimensional.

In a new e-book published this year, Clough called on museums to speed up their work to innovate and digitize collections to make artifacts accessible for a generation born in the Internet age.

A strategic plan in 1927 once called for the Smithsonian to have an office in every state so it could reach more people, though that never came to pass. Now with more digital outreach, the museums could actually realize that dream, Clough said, with the potential to reach billions of people.

"If we look at this issue of reaching people, it's more important than ever before," Clough said, noting that museum visitation among minorities is already low. For museums that received government funding to get their start, he said governments are now saying "what's next?"

"What's next is you have to reach the schools," Clough said. "Your relevance is going to be really based in part on how much you're contributing to the educational process for young people."

Other museums have already started digitizing artworks or making 3D scans of sculptures. In New York, digital guru Sree Sreenivasan was hired this year as the first chief digital officer at the Metropolitan Museum of Art.

Smithsonian officials said they are making a unique push into scanning a wide variety of 3D objects, ranging from an ancient whale fossil found in Chile to a 3D image of a supernova in space.

Some of the latest 3D technology also could transform the experience of visiting a museum. The Smithsonian is experimenting with new projections of augmented reality with 3D imagery to help bring dinosaurs or historical figures to life in an exhibit.

"Wouldn't it be great to have Abraham Lincoln walking around talking to people?" Clough said. "It can be done."

The IRS has been seeking the documents as part of a long-running investigation into how Microsoft structured a Puerto Rico manufacturing facility.
Associated Press
Jan 22nd, 2020

More than half of the new jobs will be in technology-focused roles such as software engineering.
Associated Press
Jan 21st, 2020

The newly discovered problem pertains to software powering up on the 737 Max.
David Koenig
Jan 19th, 2020

Apple, beset by falling iPhone sales, announced upcoming changes to its phone and computer software intended to highlight its increasing emphasis on digital services and to further position it as a fierce guardian of personal privacy.
Jun 4th, 2019