Boeing is stopping deliveries of the 787 until the plane's electrical system is fixed but says production is not stopping. The plane is assembled in Everett, WA, and North Charleston, SC out of pieces built all over the world. The FAA has grounded the 787s currently in use until Boeing can prove the batteries are safe. 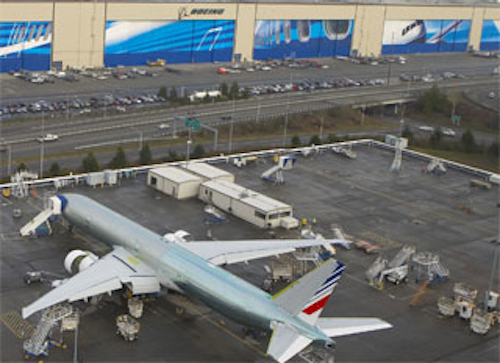 Boeing Co. is stopping deliveries of the 787 until the plane's electrical system is fixed.

Boeing says production is not stopping. The plane is assembled in Everett, Wash., and North Charleston, S.C. out of pieces built all over the world.

The Federal Aviation Administration has grounded the 787s currently in use until Boeing can prove the batteries are safe.

The FAA's emergency airworthiness directive issued late Wednesday said the 787's battery system would need to be modified, "or other actions" taken, under a method approved by the FAA. However, the agency has not said what those actions should be.

Boeing said deliveries are stopped until an FAA-approved fix has been carried out. The FAA has said it is working on a fix but it has not said how long it will take.

Boeing's move is not surprising. Many experts had suspected that airlines would not accept new 787s from the company until the FAA directive was carried out.

Boeing hasn't delivered a 787 since one went to Air India in early January, before a battery fire raised concerns about the plane's safety. Boeing has said no other deliveries were planned during that time.

A lithium ion battery caught fire on a parked Japan Airlines 787 on Jan. 7. That fire prompted federal investigations, including a potentially broad FAA look at the plane's electrical design and manufacturing.

This week the battery on an All Nippon Airways 787 overheated in flight, prompting an emergency landing. That caused the Japanese airlines to voluntarily ground their planes, followed by the FAA order later the same day.

Boeing shares fell 22 cents to close at $75.04 before the delivery announcement was made. They dropped another 14 cents in after-market trading.