Sony Corp.'s top corporate executive on Monday condemned the recent hacking assault against its film division, saying his employees were victims of a "vicious and malicious cyberattack." 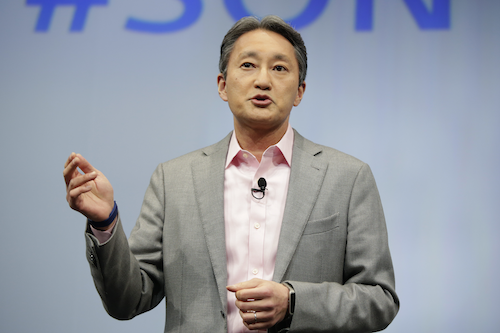 LAS VEGAS (AP) — Sony Corp.'s top corporate executive on Monday condemned the recent hacking assault against its film division, saying his employees were victims of a "vicious and malicious cyberattack," while adding that he's proud of them for standing against "the extortionist efforts of criminals."

CEO Kazuo Hirai, who hasn't spoken about publicly about the hack before, opened a press event at the International CES trade show in Las Vegas by saying he "would be remiss" if he didn't mention the controversy over the Sony comedy, "The Interview."

Hackers calling themselves the "Guardians of Peace" managed to cripple the computer systems of Sony Pictures Entertainment in late November, before subsequently releasing a trove of sensitive corporate and employee records. The FBI has since blamed the North Korean government of orchestrating the attack, apparently over the film's portrayal of an attempt to assassinate North Korean leader Kim Jong Un.

Sony initially said the film would not be released to major theaters in the face of terrorist threats by the hackers, but after the company was criticized for that decision, it scrambled to release the film to independent theaters and through streaming Internet outlets.

Hirai did not offer any new information about the hack, but said Monday evening that freedom of speech and expression are "very important" to Sony and its entertainment business. He went on to thank the telecommunications and Internet companies who helped with the release, and "most importantly the people who have gone out to see the movie in theaters or through various online venues."

He also joked about another Sony film release, saying: "By the way, 'Annie' is also a great movie as well." Sony executives spent most of the CES event talking about new televisions, high-resolution cameras and other electronic gadgets that the company is introducing this year.