Oculus is expanding its virtual-reality headset to simulate the sensation of touch and gesturing as part of its quest to blur the lines between the fake and genuine world. 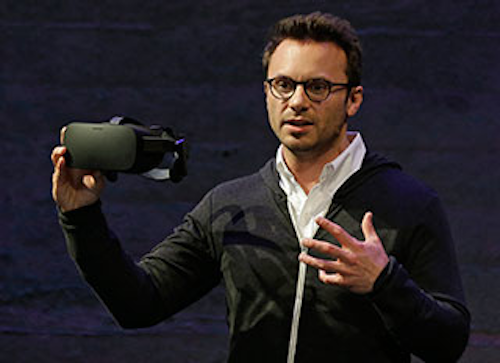 SAN FRANCISCO (AP) — Oculus is expanding its virtual-reality headset to simulate the sensation of touch and gesturing as part of its quest to blur the lines between the fake and genuine world.

The touch controllers unveiled Thursday by Oculus founder Palmer Luckey are designed to enable people to pick up guns, throw Frisbees or carry out other actions within the fantasy scenes they see through a virtual reality headset called the Rift. The controllers also will make it possible to point, wave inside the video games being played on the Rift, according to Luckey.

The half-moon shaped controllers, called Oculus Touch, will be showcased along with the Rift headset next week in Los Angeles at the Electronic Entertainment Expo, or E3, a major video game conference.

"We really think Oculus Touch is going to surprise you," Luckey, 22, said. "We think they are going to deliver an entirely new set of virtual reality experiences."

Besides showing off its latest gadgetry, Oculus provided a glimpse at the line-up of video games being designed for the Rift and announced a partnership with Microsoft Corp. to make the headset compatible with the Xbox console and devices running on the next version of the Windows operating system scheduled to be released next month.

Oculus' virtual-reality technology is so highly regarded that Facebook bought it for $2 billion last year.

Since that acquisition, the Rift has remained in a testing phase that has kept its early prototypes in the hands of video game makers and computer programmers. The first consumer model of the headset won't be released until sometime during the first three months of next year. The touch controllers start selling shortly after that, at some point between April and June.

The Rift's price hasn't been announced yet, although Oculus has previously said the headset and a personal computer need to power the technology will cost less than $1,500. The Rift package will also include a wireless controller and adapter for the new alliance with Microsoft, which is branching into another emerging niche of technology niche known as "augmented" reality with its own HoloLens headset.

Facebook and Oculus called reporters to a San Francisco studio Thursday for a glimpse of what the Rift's consumer model will look like. It's a lightweight device that will fit on top of a person's head like a helmet. Images are viewed through two screens housed inside a visor. The audio is piped through removable headphones.

The goal is to trick people's brains into believing what they are seeing and hearing is the real thing instead of a fabrication, said Oculus CEO Brandon Iribe, who started the company with Luckey three years ago with $2.4 million in financing.

The Rift's initial target market will be avid video game players. The inaugural line-up of video games built for the Rift include titles from CCP Games, Gunfire Games and Insomniac Games that will appear to transport players into space, an artic zone and a fictional land where a young man defends his home turf from a dragon.

Luckey and Facebook Inc. CEO Mark Zuckerberg, though, believe the Oculus technology eventually will extend far beyond video games to enable people's avatars to attend business meetings and bring together friends and families in virtual living rooms even though they are many miles apart. Movie buffs might even be able to insert themselves as characters in their favorite flicks.

"This isn't science fiction," Luckey said of the Rift. "This is reality."