A months-long contract dispute at ports along the West Coast could spill thousands of miles inland, where two rail companies are raising concerns about shipping complications. 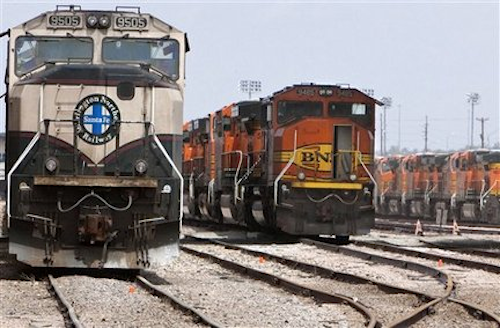 A months-long contract dispute at ports along the West Coast could spill thousands of miles inland, where two rail companies are raising concerns about shipping complications.

Some 20,000 members of the International Longshore and Warehouse Union have stayed on the job since their contract with the Pacific Maritime Association — which represents shipping line and terminal operators at 29 ports — expired last summer.

Agreements on some provisions, including healthcare benefits, have been in place for months, but the PMA says issues such as work rules, wages and requirements on the use of union workers in certain positions remain unresolved.

In the interim, each side has blamed the other for an increasing cargo backlog at several of the West Coast's largest ports, including Los Angeles and Long Beach, which serve as critical links to Asian markets.

The backlog, in turn, has led to problems for the Union Pacific Railroad and BNSF Railway. Union Pacific officials said the volume of its intermodal freight is down, while BNSF said the delay could hamper its terminals in Los Angeles and San Bernardino, California.

Both companies heavily rely in intermodal freight — cargo traveling via rail and ship or truck — for their annual revenue streams.

A federal mediator joined the negotiations this month, but progress remains elusive. Although business groups and elected officials began calling for a swift resolution long ago, cranes sat idle during the Martin Luther King Jr. holiday. Last week, thousands of longshoreman rallied in support of the union in California and Washington.

Should the labor problems persist to the point of a shutdown of West Coast ports, the railroad companies appear ready to avoid the Los Angeles-Long Beach complex in its entirety.

Nebraska-based Union Pacific said that would enable the company to prevent problems throughout its rail system, while a spokeswoman for Texas-based BNSF said "we continue to work with our customers and terminal operators to keep resources and freight moving, advising them as conditions change."

The problems from the Pacific Coast come just as the rail environment in the Midwest is recovering from a slew of problems in recent years, including historically brutal winter weather, flooding in the subsequent spring and record-high shipments of oil and grain.

Meanwhile, ports elsewhere in the U.S. are attributing increased cargo loads to problems on the West Coast. The Georgia Ports Authority said its ports in Savannah and Brunswick saw a 7 percent increase in cargo tonnage in the last six months of 2014, with Savannah alone seeing an increase of 13 percent.