Livestock producers in the Midwest and vegetable growers in the Sun Belt alike are reaping the immediate benefits. And with average retail gas prices for 2015 forecast to be about $1 lower than last year, farmers this spring may end up planting more energy-intensive crops. 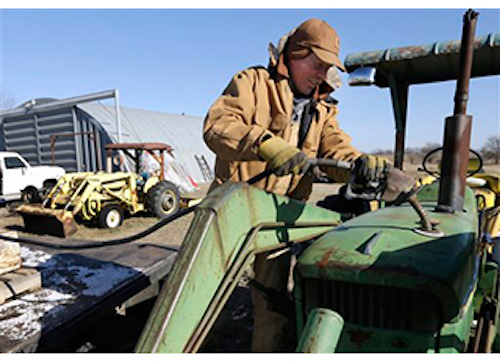 WICHITA, Kan. (AP) — The recent plunge in fuel prices has been a welcome relief across the agricultural sector, helping ease the pain of low grain prices for growers and boosting profits for cattle ranchers.

Livestock producers in the Midwest and vegetable growers in the Sun Belt alike are reaping the immediate benefits. And with average retail gas prices for 2015 forecast to be about $1 lower than last year, farmers this spring may end up planting more energy-intensive crops, such as corn or rice, as the cost to irrigate and cultivate drops.

Consumers, however, shouldn't expect to see lower prices at the supermarket. Transportation costs constitute only a small slice of those prices, and it takes months, if ever, for cost savings at the farm level to trickle to the shelf sticker.

For years, Cree hasn't been able to afford to fill the fuel tanks at his farm west of Lawrence. But with the local price of untaxed diesel and regular gasoline both below $2 a gallon, Cree plans to completely fill the two 300-gallon and one 200-gallon tanks.

It takes fuel to feed his 100 cows all winter long, fuel to drive to the feed store. The lower prices will also make "a big difference" this summer. Each time he harvests his hay, his tractor must make three trips over every field — one to mow it, one to rake it, and another to bale it.

"We are hoping that for the first time in a long, long time to have the burden of high fuel prices off our backs — so we can maybe make a little bit of money this year," Cree said.

Farmers use mostly off-road diesel, for which they don't pay federal and state taxes, in their tractors and other farm equipment. While diesel averages about 20 cents per gallon more than regular gasoline, road taxes alone can add 14 percent more at the pump. On-road diesel prices nationwide are forecast to average $1.86 a gallon this year — well below the $2.81 per gallon in 2014. And looking into 2016, prices are forecast to average $2.30 a gallon for on-road diesel, according to the U.S. Energy Information Administration.

That's good news for farmers who depend on row crops, and who've seen farm income drop by as much as 50 percent because of low grain prices.

Lower energy prices increase planted acres for most major row crops and drop the price of the commodity, according to an April 2014 federal study on the impact crude oil prices have on agriculture. Nearly 20 percent of operating costs for major U.S. row crops are tied to direct energy expenses, the Economic Research Service's study showed.

Vance Ehmke, who grows wheat near Healy in western Kansas, said low diesel fuel prices will "definitely help," but might not be enough.

Consumers can expect to use some of their savings at the pump toward grocery bills. The price of foodat both restaurants and grocery stores is predicted to go up 2 to 3 percent in 2015, according to agricultural economist Annemarie Kuhns with the Agriculture Department's Economic Research Service.

Only 4.7 cents of every dollar spent at the supermarket goes toward food transportation costs, Kuhns said. Mostly, retail food prices are driven by other factors, such as supply and demand. That's evident in beef prices, which soared when ranchers had to liquidate cattle herds during recent droughts.

Among those currently enjoying the lowest-in-years diesel prices is Florida vegetable grower Rick Roth, who also operates a packing house where crops such as celery, leafy greens and radishes are sorted and cleaned before shipped.

Roth figures he buys about 5,000 gallons of diesel fuel a week, which he mainly uses in his tractors for land preparation, planting, cultivation, spraying and harvest at his farm in Palm Beach County. Any fuel savings will go toward the bottom line, he said, and will help keep his farm fully staffed with 25 full-time employees and 150 seasonal workers.