FTC Moves To Block Sysco's $3.5B Purchase Of US Foods

Antitrust regulators are challenging the $3.5 billion sale of US Foods to Sysco, saying the deal would hurt customers by reducing competition between food supply companies. 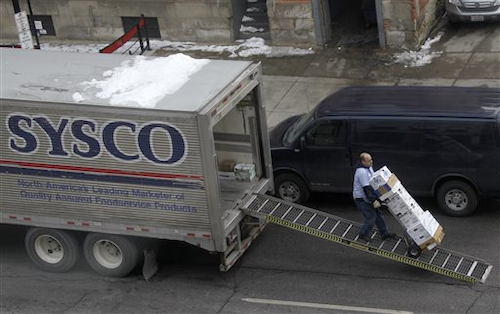 NEW YORK (AP) — Antitrust regulators are challenging the $3.5 billion sale of US Foods to Sysco, saying the deal would hurt customers by reducing competition between food supply companies.

Sysco Corp. agreed to buy US Foods in December 2013, saying they would create a company with $65 billion in annual revenue. But they can't complete the deal without approval from the Federal Trade Commission.

The FTC on Thursday filed a complaint to block the deal, saying Sysco and US Foods are by far the largest companies in their industry and would have a "dominant" position in the marketplace. The agency said the combined company would likely lead to higher prices for customers like restaurants, hospitals, hotels and schools.

The FTC's commissioners opposed the deal by a 3-2 vote.

Sysco said it will contest the FTC's complaint. The Houston company said there is a lot of competition in the industry and most restaurants and food stores buy from local distributors rather than national ones.

Sysco and Rosemont, Illinois-based US Foods had agreed to sell 11 food distribution centers in order to address concerns from the agency, but the FTC said that proposal isn't good enough. The agency said the buyer, Performance Food Group, wouldn't be large enough to create significant competition. The 11 distribution centers have about $4.6 billion in annual revenue.