A Food and Drug Administration panel is planning to review smokeless tobacco maker Swedish Match's request to certify its General-branded pouches of tobacco as less harmful than cigarettes. 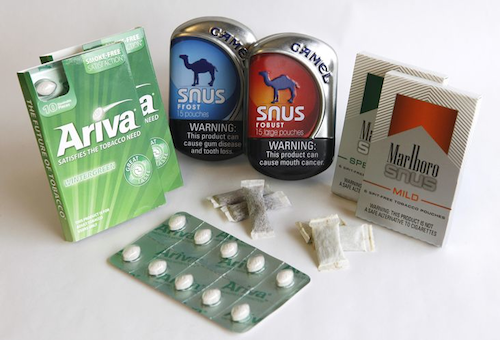 The Tobacco Products Scientific Advisory Committee has scheduled a two-day meeting beginning April 9 to discuss the request that the agency approve the snus (pronounced "snoose") products as "modified risk."

Snus — teabag-like pouches or loose tobacco that users stick between their cheek and gum to get their nicotine fix — are popular in Scandinavian countries and are part of a growing smokeless tobacco market in the U.S.

In an application filed in June, the company, whose North American headquarters is in Richmond, Virginia, is proposing to say the snus products are addictive but substantially less risky than smoking. The company also wants permission to remove one of the required health warning labels relating to oral cancer.

The advisory panel's review and FDA's ultimate action on the application are being closely watched by both the public health community and tobacco companies, which are looking for new products to sell as they face declining cigarette demand due to tax increases, health concerns, smoking bans and social stigma. Many panels advise the FDA on scientific issues. The agency doesn't have to follow their recommendations but usually does.

Swedish Match's application also highlights a philosophical debate over how best to control tobacco. One camp says there's no safe way to use tobacco and pushes for people to quit above all else. Others embrace the idea that lower-risk alternatives like smokeless tobacco or electronic cigarettes can improve public health, if they mean fewer people smoke.

The entire review process is expected to take about a year under a 2009 law that gave the FDA authority to evaluate tobacco products for their health risks and lets the agency approve ones that could be marketed as safer than others. None has been given the OK yet, but the agency has noted that some tobacco products could pose less of a health risk to users than smoking.

General (pronounced gen-er-AHL) snus was first sold in Sweden in mid-1860s and has been sold in the U.S. since 2007 by the subsidiary of Stockholm-based Swedish Match AB. It is currently available nationwide in more than 20,000 stores and is kept in small chillers to preserve the product. The brand has at least a 6 percent share of the retail market, which is dominated by Winston-Salem, North Carolina-based Reynolds American Inc., which sells the market-leading Camel-branded snus, and Richmond, Virginia-based Altria Group Inc., which sells Marlboro-branded snus.