The U.S. trade deficit fell in November to the lowest level in almost a year, thanks to the country's swiftly shrinking thirst for foreign oil. 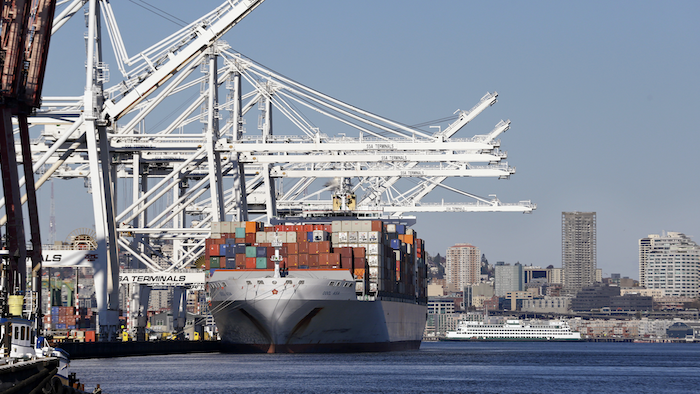 WASHINGTON (AP) — The U.S. trade deficit fell in November to the lowest level in almost a year, thanks to the country's swiftly shrinking thirst for foreign oil.

The deficit — imports minus exports — narrowed to $39 billion during the month, down 7.7 percent from a revised October deficit of $42.2 billion, the Commerce Department reported Wednesday.

Primarily due to oil, imports posted a steeper drop of 2.2 percent to $235.4 billion. The volume of crude imported in November hit its lowest level since 1994, while the average price hit a two-year low of $82.95 a barrel. A simultaneous boom in domestic oil production has also cut the country's reliance on imported oil.

Economists predict that the oil market will continue to reduce the U.S. trade deficit and potentially bolster the overall economy. To be sure, a lower bill for foreign oil is likely to be offset somewhat by a stronger dollar, which makes U.S. goods more expensive in overseas markets, and economic weakness in such key export markets as Europe and Japan.

"The trade gap will continue to shrink apace until the oil import tab stops falling like a rock," said Patrick Newport, an economist at Global Insight.

Some analysts revised their forecast for overall growth in the October-December quarter higher based on the better-than-expected November trade report.

Ian Shepherdson, chief economist at Pantheon Macroeconomics, said trade would be less of a drag in the fourth quarter than he had previously thought. He now projects overall economic growth of 2.25 percent in the October-December quarter. Other economists are more optimistic and estimate growth of 3 percent or higher in the fourth quarter.

The politically sensitive trade deficit with China dropped 8 percent to $29.9 billion in November but remained on track to set a new all-time high for the year. America's deficit with China is the largest for any country. It has added to pressure on Congress and the Obama administration to take tougher actions against what critics see as unfair Chinese trade practices such as the country's manipulation of its currency to gain trade advantages over American companies.

The widening trade gap with China comes at a time when the Obama administration hopes to finally get Congress to approve the fast-track authority it needs to wrap up a major 12-nation trade agreement with Pacific Rim countries known as the Trans-Pacific Partnership.

The administration sees the trade deal as one of the areas where President Barack Obama may be able to find common ground with Republicans who took control of the Senate this week and now control both chambers of Congress.

The U.S. deficit with the European Union dropped 7.4 percent to $11.8 billion in November as imports from that region fell more than U.S. exports. There is concern that an economic slowdown in Europe will dampen U.S. export sales.

For the first 11 months of 2014, U.S. energy exports are up 9.6 percent compared with the same period in 2013, putting them on track to hit a record even with the recent fall in prices.