The Federal Reserve's outlook for the U.S. economy is steadily brightening. Yet the Fed will be "patient" in raising interest rates from record lows. 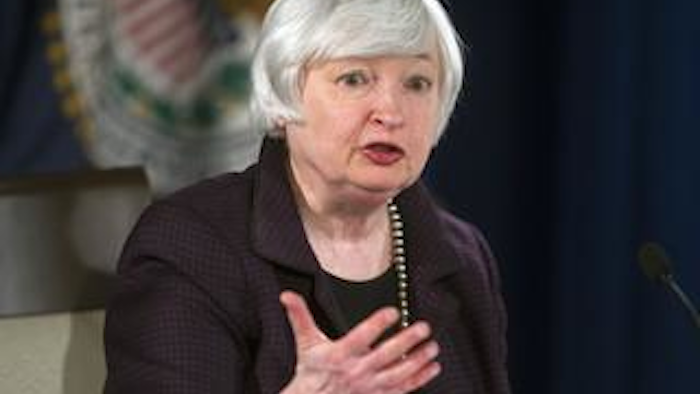 WASHINGTON (AP) — The Federal Reserve's outlook for the U.S. economy is steadily brightening. Yet the Fed will be "patient" in raising interest rates from record lows.

That was the dual message the central bank sent Wednesday in a statement it issued after its latest policy meeting.

Why is no rate hike likely soon? The main reason, the Fed suggested in its statement, is that inflation remains well below the central bank's target rate.

And it said the pressures holding down inflation — mainly plunging oil prices — have intensified. The Fed said it thinks inflation will decline further before eventually reaching the central bank's 2 percent target rate.

Paul Ashworth, an economist at Capital Economics, said the statement suggested that the Fed "is still taking the view that the collapse in oil prices is a net positive for the economy."

The Fed's statement also made clear that policymakers still think the impact of low oil prices on inflation will prove temporary, Ashworth said

The statement was approved on a 10-0 vote.

On Wall Street, stocks fell after the Fed's statement was issued in mid-afternoon, though prices were also pressured by the continued fall in oil prices. The Dow Jones industrial average dropped 195 points, or 1.1 percent.

And the yield on the 10-year Treasury note touched 1.70 percent, the lowest level this year. It edged back up to 1.72 percent late in the day, compared with 1.82 percent late Wednesday.

The Fed's emphasis on low inflation could affect when it decides to raise its key short-term rate from near zero. Many economists have forecast a rate hike in June, but some have pushed back their predicted timetable.

The Fed's statement did not explicitly mention the weakening global economy. But it did say the Fed planned to take "international developments" into account in determining when to start raising rates.

The Fed operates with two key mandates: Maximizing employment and keeping prices rising at a moderate pace of 2 percent.

The U.S. economy's steady growth and improving job market would normally argue for a move to begin raising rates to prevent high inflation. The Fed has kept its benchmark rate near zero since 2008 to encourage borrowing, spending and investment and support the recovery from the Great Recession. The Fed's key rate affects rates on many consumer and business loans.

But the concerns about global economic weakness and low inflation have raised doubts about when the Fed's first rate increase will occur. A growing number of economists say the date could slip to September or even later. Economists at Morgan Stanley this week pushed back their forecast for the first rake hike to March 2016 because of the factors holding inflation down.

Some economists said the Fed's references to both stronger growth and lower inflation largely offset each other. That suggests that the Fed sees little pressure to raise rates soon.

"This is a wash, from a policy perspective," said Michael Gregory, an economist at BMO Capital Markets.

At the same time, Gregory said the Fed's mention of weakening economies overseas shows it is increasingly concerned about the strengthening U.S. dollar. A rising dollar makes imports less expensive and holds down U.S. inflation. For that reason, Gregory expects the Fed to put off a rate hike until September.

Chair Janet Yellen said last month that by using the word "patient," the Fed intended to signal that there would be no rate increase for at least two meetings. That would mean that if officials want to signal that a rate hike is coming in June, they would need to alter the "patient" wording at their next meeting in mid-March.

A complicating factor is the European Central Bank's new plan to flood its sputtering economy with more than 1 trillion euros. That money should keep the eurozone's interest rates ultra-low and could lead some investors to buy higher-yielding U.S. Treasurys. That would further strengthen the dollar and could push U.S. inflation further below the Fed's 2 percent target.

Growth in China, the world's second largest economy, is slowing, too.

By contrast, the U.S. economy added nearly 3 million jobs added last year, enough to cut the unemployment rate to 5.6 percent. That is just above the Fed's goal of 5.2 percent to 5.5 percent unemployment.

Still, Yellen and other Fed officials have pointed to other factors — such as weak pay growth and a still-high number of part-time workers who can't find full-time jobs — as evidence that more must be done to achieve a healthy job market.

U.S. prices rose just 1.2 percent in the 12 months that ended in November, according to the Fed's preferred gauge of inflation. When inflation is too low, consumer spending — and economic growth — can slow as people delay purchases on the assumption that the same or lower prices will be available later.

The biggest fear is deflation — a broad decline in prices and income that can further restrain spending and even tip an economy into recession.