After generations of bootlegging, direct descendants of the Hatfields have teamed up with the McCoy name to produce legal moonshine in southern West Virginia with the state's blessing. 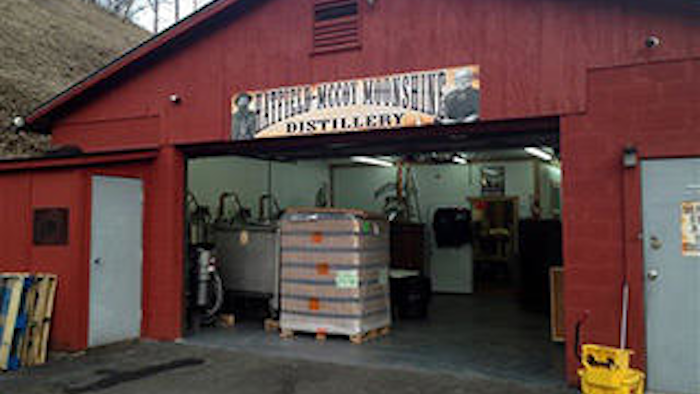 GILBERT, W.Va. (AP) — After generations of bootlegging, direct descendants of the Hatfields have teamed up with the McCoy name to produce legal moonshine in southern West Virginia with the state's blessing — the start of a new legacy for the families made famous for their 19th-century feud.

Production of "Drink of the Devil" has been in full swing at a distillery on original Hatfield land, bringing batches to the nation's store shelves using the original recipe of family patriarch William Anderson "Devil Anse" Hatfield.

Overseen by Chad Bishop, husband of Hatfield's great-great-great granddaughter, all the work is done by hand in a converted garage on a mountainside six miles from "Devil Anse" Hatfield's gravesite.

After going through fermentation and distilling processes at Hatfield & McCoy Moonshine, batches are bottled, corked and packaged in-house before being shipped to West Virginia, Florida, Kentucky, New Jersey, Pennsylvania and Virginia.

Among those lending knowledge and elbow grease to the business are Bishop's wife, Amber, and her mother, Nancy Hatfield, the oldest living descendant of "Devil Anse."

Ronald McCoy, a great-great grandson of McCoy patriarch Randolph "Ole Ran'l" McCoy, was a consultant for the distillery's startup and the product's testing and marketing.

Sold in 25-ounce bottles, moonshine is essentially whiskey that hasn't aged. The business sells between 1,800 and 3,000 bottles each month at $32.99 per bottle.

"I'll be honest. It's just kind of crazy," Amber Bishop said. "We never dreamed that it was ever going to be anything like this."

Considering the families' history, her ancestors probably wouldn't have, either.

The feud between the Hatfields of West Virginia and the McCoys of Kentucky is believed to have begun in the 1870s over a stolen pig and escalated over timber rights. By 1888, at least 12 people had died as a result of the shooting war. The violence ended by 1900, and a truce signed in 2003 marked an official end to the conflict.

Now, in the name of commerce, the families are banding together.

"They really take it very seriously," distillery attorney Greg Chiartas said. "It really is about economic development for them."

Interest in the former feud spiked in 2012 when a miniseries co-starring Kevin Costner and Bill Paxton aired on cable television. A year later a cable reality show featured several Hatfield descendants and relatives of the McCoys on the maternal side.

After the state passed legislation allowing for regulated moonshine distilleries, Chad Bishop, a former longtime coal miner who also comes from a long line of family moonshiners, acquired the necessary permits in 2012. The distillery started shipping to the state Alcohol Beverage Control warehouse in November 2013 for distribution to retailers.

The equipment alone to get the operation started cost $200,000, and there have been other challenges. Making batches with local products has kept the profit margin low.

The operation is in an ongoing trademark dispute with a Missouri-based group of investors that also wants the Hatfield and McCoy family names on its moonshine products. Chiartas said he's confident an agreement will be worked out that lets both parties use the names.

"I know God's not in moonshine. I know that," Nancy Hatfield said. "This is just the way I was raised. I come from a moonshining daddy. He used to bootleg when I was a little girl. I used to bottle it for him in the bathtub."

Going commercial with moonshine has "always been my idea," she said.

McCoy, who doesn't have an equity stake in the business, didn't respond to a request for comment made through Bishop. Chiartas said McCoy, too, is deeply religious and isn't involved in the daily operations.

"He's not opposed to it," Chiartas said. "But he doesn't believe he shouldn't make any profits from it. That would be like a violation of his religious beliefs. And so we just respect that and we keep him posted on how things are going."