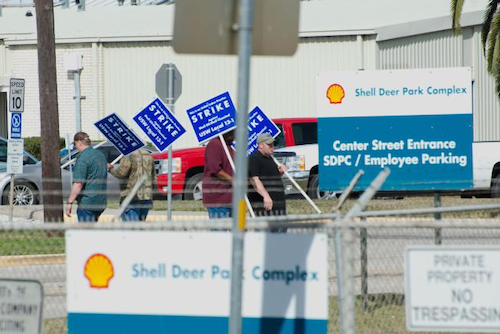 The walkouts, however, would impact about 10 percent of the nation's overall capacity. Five of the affected plants are in Texas, with two in California and the others in Kentucky and Washington.

The strike call came after the union rejected the latest offer from Royal Dutch Shell, the industry's lead negotiator.

"Shell refused to provide us with a counter-offer and left the bargaining table," said USW International President Leo Gerard. "We had no choice but to give notice of a work stoppage."

Shell officials responded that the company remains "committed to resolving our differences with USW at the negotiating table to reach a mutually satisfactory agreement" — though the industry had also prepared for a potential strike by training managers and non-union workers and setting up lodging for potential replacement workers.

Although the stoppage could take a toll on the nation's refining capabilities, it has helped alleviate a months-long slide in the price of oil.

Crude prices had plummeted to less than half their June 2014 levels as production increases outpaced global demand, but the West Texas Intermediate and Brent indexes increased 4.8 percent and 5 percent, respectively, in early trading Monday.