Mulally ended months of speculation that had already clouded the debut of the new Mustang last month and threatened to overshadow next week's widely expected unveiling of a new F-150, plus the launch of 23 new vehicles this year. 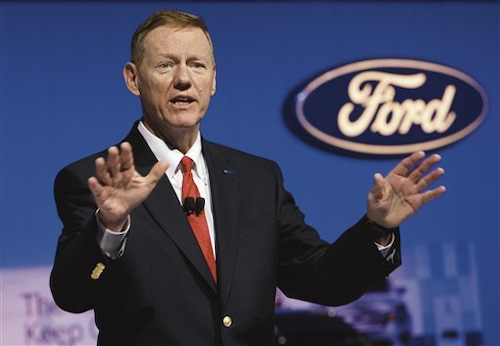 DEARBORN, Mich. (AP) -- All eyes will be on Ford's new vehicles — not its CEO — at the Detroit auto show next week.

CEO Alan Mulally finally put to rest rumors that he will leave Ford to run Microsoft. Mulally said Tuesday he'll stay at the Dearborn-based automaker through at least the end of this year.

"I would like to end the Microsoft speculation because I have no other plans to do anything other than serve Ford," Mulally told The Associated Press in an interview.

With that, Mulally ended months of speculation that had already clouded the debut of the new Mustang last month and threatened to overshadow next week's widely expected unveiling of a new F-150, plus the launch of 23 new vehicles this year. Mulally wouldn't say whether he had talked to Microsoft about the CEO job, but said the speculation had been a distraction for Ford.

"You don't have to worry about me leaving," Mulally said.

Mulally, who is credited with returning Ford Motor Co. to profitability and ending the toxic infighting in its ranks, will stick with his plan to stay at Ford through at least the end of 2014. Ford announced that plan in November 2012. At the same time it promoted Mark Fields — Mulally's likely successor — to chief operating officer.

Over the last few months, there have been numerous reports that Mulally was on the short list of candidates to replace Microsoft Corp. CEO Steve Ballmer. Microsoft announced in August that Ballmer plans to step down as CEO.

Daniel Ives, an analyst at FBR Capital Markets, said in an email that Mulally's decision was a negative for Microsoft because he was the front-runner for the CEO job. Microsoft wouldn't say Tuesday if Mulally's announcement came as a surprise.

"Out of respect for the process and the potential candidates, we don't comment on individual names," a Microsoft spokesman told the AP.

Mulally's withdrawal from Microsoft's CEO derby shrinks the pool of candidates who have been touted as Ballmer's potential successor.

Remaining candidates include Satya Nadella, who oversees the Microsoft's lucrative business of selling computer servers and online services to other companies and government agencies, and Tony Bates, who joined Microsoft in 2011 when the company paid $8.5 billion for video calling service Skype. Microsoft's pending acquisition of Nokia's smartphone business also has spurred talk that Nokia CEO Stephen Elop will replace Ballmer.

Mulally, 68, was trained as an aeronautical engineer. He spent 36 years at Boeing Co. — and was president of the company's commercial airplane division — before Ford Chairman Bill Ford lured him to the struggling automaker in 2006.

Mulally overcame skepticism about being an outsider in the insular ranks of Detroit car guys by quickly pinpointing the reasons why Ford was losing billions each year. Just months into his tenure, he mortgaged all of Ford's assets — including its Blue Oval logo — for a $23.5 billion loan to fund a massive restructuring. It was a prescient move that helped Ford avoid the fate of General Motors and Chrysler, which both filed for bankruptcy protection in 2009. Ford got the Blue Oval back in 2012.

Joe Hinrichs, Ford's president of the Americas, said Mulally's infectious optimism and clear plan for the future helped the company get through the dark days of the recession, when it was forced to close plants and lay off thousands of workers.

"He could live in the reality of today but also look to the future and paint a path to how we're going to get there and make it fun," Hinrichs told the AP last month. "That's a very unique gift that Alan has."

During his tenure, Ford has earned $32.9 billion in pretax profit and its shares have more than doubled. The company expects to earn $8.5 billion before taxes in 2013. But it spooked some investors last month when it said pretax profits would be slightly lower in 2014 as it launches nearly two dozen vehicles worldwide.

Mulally said Tuesday that the 2014 results will be "absolutely consistent with us investing even more in the enterprise for long-term profitable growth."

Mulally said Fields has taken over leadership of Ford's now-famous Thursday management meetings, and he's even moved over one chair. But he still shares day-to-day leadership with Fields, concentrating more on long-term strategic issues such as meeting government fuel economy standards, connectivity of cars and trucks, global expansion and rebuilding the company's Lincoln luxury brand.

His influence is everywhere at Ford. Many workers carry the wallet-sized "One Ford" cards he had printed, spelling out his expectation that employees work together to accelerate new vehicle development and profits.

Erik Gordon, a business and law professor at the University of Michigan, said Mulally's decision to stay ensures an orderly transition to a new CEO.

"It's important for a company as complex as Ford to do that," he said.

Mulally has been richly rewarded for his efforts, with total compensation of more than $174.45 million in his seven years at Ford. His pay has been a sore point for some workers, and UAW President Bob King once called it "outrageous." But Mulally has defended his compensation, saying it's entirely tied to the success of the company.