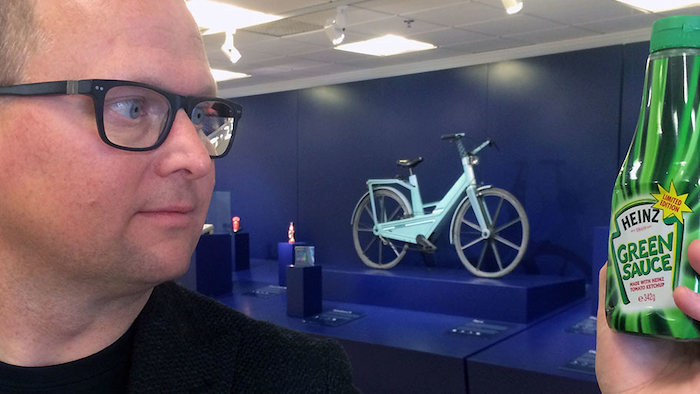 Which is why these creations, with dozens of others, feature in the new Museum of Failure , a wacky parade of rejected products from years gone by set up in the Swedish town of Helsingborg.

It's the brainchild of 43-year-old curator and clinical psychologist Samuel West. The idea came to him while on holiday and he quickly purchased the internet domain name. West later realized he'd accidentally misspelled "museum" — a sure sign the project would succeed.

"We know that 80 to 90 percent of innovation projects, they fail and you never read about them, you don't see them, people don't talk about them," West says. "And if there's anything we can do from these failures, is learn from them."

Iconic motorcycle manufacturer Harley-Davidson makes an appearance with a men's eau-du-toilette, launched in the mid-1990s.

"The fans hated it," West says. "They had Christmas ornaments, Barbie dolls, all kinds of other stuff with the Harley-Davidson logo and it sort of trivializes the brand."

Even one of the world's best-known businessmen, President Donald Trump, makes an appearance.

The "I'm Back And You're Fired" board game from 2004 looks like Monopoly, but players use "T'' branded pieces and the paper notes are adorned with Trump's image.

"It's a boring version of Monopoly. It's simplified so stupid people can play it, but it's also horribly boring," West says.

The Museum of Failure is also home to some high-tech devices, including Google's Glass headset with augmented reality display and in-built camera.

"The problem was Google released it too early, it was still a prototype, so it was full of bugs," West says.

"The Segway was supposed to revolutionize the way we transport people," West says. "And we all know that the Segway today is used by tourists before they go get drunk."

Experts say innovation is tough and failure is often part of the process.

"You're working on the edge of tomorrow," says Nicolai de Gier, a professor at the Royal Danish Academy of Fine Arts. "It's like the other part of trying is failing, so it's just a very natural thing and very important thing."

West says many brands featured in his museum want nothing to do with it. But he says other companies have booked large group visits, perhaps to learn from past mistakes.

"It's liberating for us, when we try out a new skill or learn something, it's OK to fail," he says.

The museum does offer some hope. On display is an Apple Newton personal digital assistant from 1993. The bulky black device paved the way for the iPhones and iPads that millions use today.

The Museum of Failure opens June 7 and will stay in its gallery space until at least early September. Entry is 100 Swedish kroner, or approximately $11.