California Car Battery Recycler To Close in Deal with Feds

A battery recycling plant that violated hazardous waste laws and spewed toxic emissions for decades on the outskirts of Los Angeles will close and spend $50 million to clean the site and surrounding neighborhoods, federal prosecutors announced Thursday. 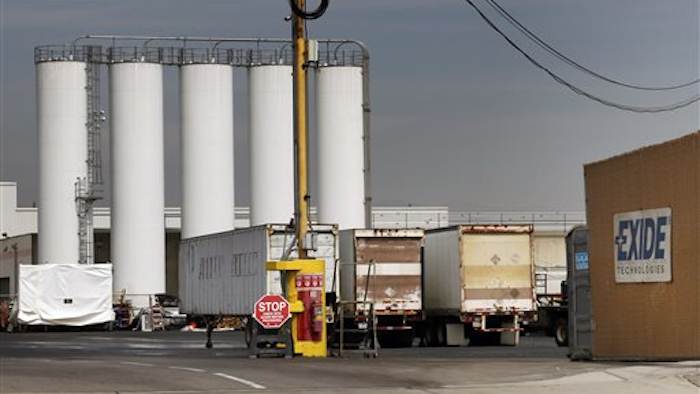 Los Angeles, California — A battery recycling plant that violated hazardous waste laws and spewed toxic emissions for decades on the outskirts of Los Angeles will close and spend $50 million to clean the site and surrounding neighborhoods, federal prosecutors announced Thursday.

Exide Technologies admitted felony violations over 20 years but avoided criminal prosecution in the agreement that achieves what residents of surrounding poor communities couldn't get state regulators to do for years despite a long history of violation notices and fines.

"Our long nightmare is over," Monsignor John Moretta of Resurrection Church said on behalf of community groups. "We have attended dozens and dozens of meetings and hearings always fighting for what we saw as something obvious: Exide was poisoning our community and had to be closed."

The 15-acre Vernon plant, 5 miles southeast of downtown Los Angeles, had been idle for a year amid legal and environmental battles, but its owners hoped to reopen.

The agreement allows the Milton, Georgia-based company to emerge from bankruptcy and afford the cleanup rather than being forced to liquidate assets and close operations in more than 80 countries, where it employs about 10,000 people.

"If the company was no longer viable, we would no longer be able to achieve the immediate result of the facility's closure, and the government would be left holding the bag for the cleanup," Acting U.S. Attorney Stephanie Yonekura said. "This is the best solution for a very difficult environmental problem."

The cleanup will be overseen by the California Department of Toxic Substances Control, which issued an order Thursday to close the facility after finding it cannot meet public health and environmental safeguards.

The department was harshly criticized for failing to protect the public as dangerously high lead levels were found in the lawns of people living in Maywood and the city's largely Latino neighborhood of Boyle Heights.

"The facility was allowed to operate without a permit for decades, leaking lead, arsenic and other hazardous waste materials into the streets where children play," state Senate leader Kevin De Leon said at a legislative hearing Thursday. "Those who let this happen must be held accountable."

DTSC Director Barbara Lee said later that given her agency's history she understands skepticism about it making sure Exide follows through with the cleanup. But she said the department had shown in the past two years it was serious about cracking down on the plant.

The company said it signed the agreement with prosecutors after being notified DTSC would reject its hazardous waste facility permit.

The agreement requires Exide to use $38.6 million it agreed to set aside last fall for closure and cleanup of its site and another $9 million for cleaning up soil around 216 surrounding homes. After those homes are cleaned up, the company must expand cleanup to other areas.

Cleanup is expected to take at least five years and is one of eight sites the company is responsible for cleaning up nationwide, said Assistant U.S. Attorney Joseph Johns.

If Exide doesn't complete the cleanup, it could be criminally prosecuted and face fines up to $500,000 a day for each felony violation of illegal disposal, storage and transportation of hazardous waste it admitted over two decades. The company acknowledged it hauled waste in leaking trucks more than 100 miles from Los Angeles to a Bakersfield facility not permitted to receive hazardous material, Johns said.

He said the decision was tough for prosecutors, but it made more sense for the community.

"The right thing to do was not worry about sending one or two people to jail for a year or two, but rather prevent another 50- to 100-year sentence for 110,000 people," Johns said.

The Vernon plant had been in operation since 1922 when Exide took over in 2000.

It employed 130 people in recycling operations that melted down the lead core in used car batteries and shipped the lead to Exide's battery manufacturing plants. Prosecutors estimated the plant recycled 30,000 to 40,000 batteries a day and grossed $15 million to $38 million a year.

Community and environmental groups planned a meeting Thursday night to celebrate the closure.

"We've been the dumping ground for Exide for so long," said Mark Lopez, who grew up in Boyle Heights and is the third-generation of his family to demonstrate against the plant. "For a long time Exide was told they didn't have to follow the rules."

The rules are now set down in a six-page agreement signed by the company's CEO.