Industrial Robotics Market To Reach $44B By 2020 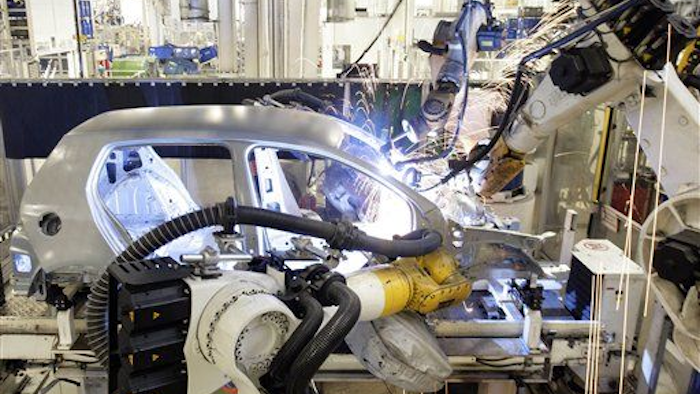 The Industrial Robotics market will flourish in the coming years, according to a report from U.S. market intelligence firm Transparency Market Research (TMR), which forecasts a $44.4 billion market value by 2020.

The predication would signify a rather impressive improvement, as the global industrial robotics market had a value of $28.9 billion in 2013. The report also suggests the market will improve at a compound annual growth rate of 6.2 percent between 2014 and 2020.

Various factors will help to drive the global industrial market improvements, according to the report. Those factors include a pervasive embrace of robotics in small and medium enterprises and rising labor costs. Other factors include greater investment in research and development pertaining to the market, as well as reduction of duties, especially as it pertains to the Asian Pacific region. More robotics in the manufacturing sectors and strategic business expansion initiatives will also provide for more opportunities in the industrial robotics market within the aforementioned period.

The report indicates that precision and optics, metals, and food and beverages will be the three industrial segments which will increase demand for industrial robots in the near future.

TMR’s report broke the market down into various sections, with those classifications being type, industry, geography and function.

Regionally, the report sectioned off the market into North America, Europe, Asia Pacific, and the rest of the world.

The global industrial robotics market was led by the Asia Pacific region in 2013. According to the report, it is believed that much of the future demand for industrial robotics in the region will “come from small and medium enterprises that will take to robotic applications on a massive scale.”

In North America, the report believes Mexico will present a promising market for industrial robotics.

The various segments in which TMR classifies industry include automotive, precision and optics, food and beverages, machinery, metals, rubbers, chemicals and plastics, electrical and electronics.

In terms of function, the report breaks the global industrial robotics market into milling, cutting and processing, assembling and disassembling, materials handling, painting and dispensing, soldering and welding.

According to the report, “Stagnating industrial manufacturing and postponement of investment owing to high costs of capital will have an adverse impact on the performance of the global industrial robotics market in the forthcoming years.”