It's an unexpected bright spot because alternative-energy stocks have long been known as some of the riskiest in an area that's already prone to big swings. 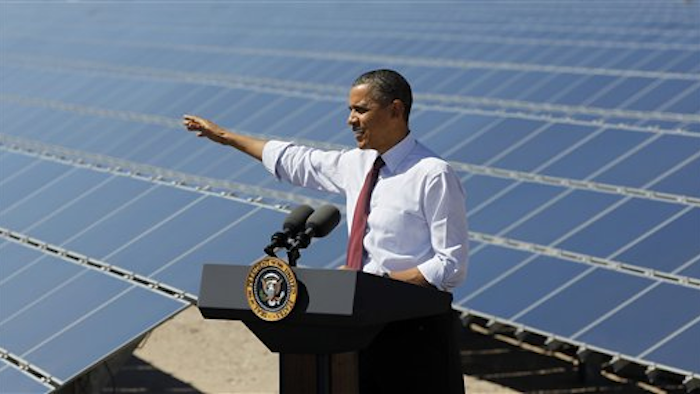 NEW YORK (AP) — Even as the tumble in oil prices pummels the industry, one small -- and perhaps surprising -- group of energy stock funds has held up better than its peers: those investing in solar, wind and other alternative-energy sources.

It's an unexpected bright spot because alternative-energy stocks have long been known as some of the riskiest in an area that's already prone to big swings. The group has historically shown flashes of promise, only to plummet in disappointment. Alternative-energy stocks also have oftentimes struggled when the price of oil was falling. The S&P Global Clean Energy index plunged 66 percent in 2008, more than the broad stock market or the price of oil.

"The whole industry feels like it's about to move to being a grown-up, real industry, where we won't have such high volatility," says Edward Guinness, portfolio manager of the Guinness Atkinson Alternative Energy fund. His fund has lost roughly 6 percent in 2015, but that's better than 91 percent of the other energy funds in its category.

To be sure, investing in alternative-energy funds can still be risky. The industry largely remains dependent on subsidies and government support to drive growth, and a key U.S. tax credit for solar power is set to curtail sharply in 2017. The U.S. is the world's second-largest solar market, which means any decline in demand will be significant for the industry.

Clean energy is also a global industry, as much as it's a global issue. That means funds often keep the bulk of their portfolios abroad, opening up U.S. investors to the risk that fluctuations in foreign-currency values can eat into returns.

Alternative-energy stocks also remain far below their peaks before the worst of the Great Recession. The S&P Global Clean Energy index, for example, is more than 80 percent below where it was in late 2007.

Still, alternative-energy fund managers remain optimistic, so much that some say they're not satisfied with merely having beaten other traditional energy stock funds over the last year.

The Calvert fund is nearly flat this year -- down less than 1 percent -- making it the top fund in the energy category, according to Morningstar. But the broad S&P 500 index has returned 3 percent over the same time. The Calvert fund holds everything from solar-equipment makers to wind-farm managers to companies that help customers get more energy efficient.

Among the reasons for optimism:

For years, alternative-energy stocks would often rise and fall with the price of oil. The thinking was that higher-priced oil would mean more demand for alternative energy, while cheap oil would mean less pressure to develop solar and other new sources of energy.

But that mindset started to break down a few years ago, for a simple reason: Oil doesn't compete with wind or solar power to fuel U.S. power plants. Oil products power cars and trucks, but generate less than 1 percent of the country's electricity.

The markets for coal and natural gas are much more important to the prospects of solar and wind power developers. Coal-fired power plants are still the largest source of electricity in the country, though coal's importance is sliding due to environmental concerns.

— COSTS ARE COMING DOWN.

The alternative-energy industry is getting closer to the point where the electricity that it produces is the same price as power generated from traditional sources. When prices are comparable, the industry won't need subsidies and can become a much healthier competitor. In some areas of the world, such as Chile and India, that's already beginning.

O'Connor says prices for solar equipment in some regions have dropped nearly 90 percent since just 2006.

"The advances in technology and cost declines have been stark the last number of years, and we expect that to continue over the coming years," he says. "People think it's expensive, and that's not the case."