A new generation of toilets may one day make toilet paper — and the need to put one's hands anywhere near the unspeakable — seem like chamber pots and outhouses: outdated and somewhat messy throwbacks reserved for camping trips. 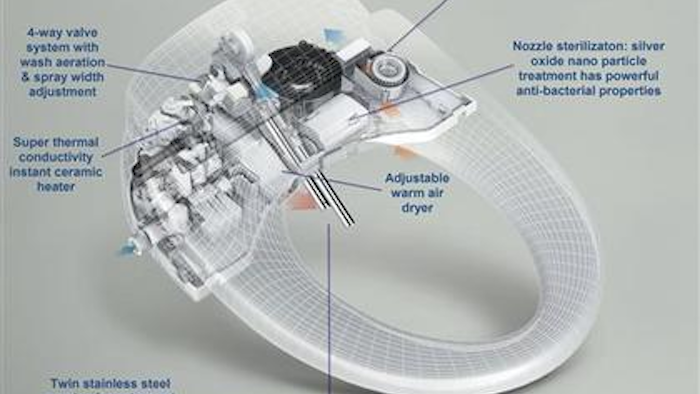 First came covered sewers, then indoor plumbing and flush toilets. Now, one bathroom at a time, another major shift in toilet hygiene is quietly underway. A new generation of toilets may one day make toilet paper — and the need to put one's hands anywhere near the unspeakable — seem like chamber pots and outhouses: outdated and somewhat messy throwbacks reserved for camping trips.

Unlike traditional toilets, the high-tech version washes from behind and — if desired — in front with water. Better models allow for temperature, direction and pressure control, and have retractable spritzing wands and automatic driers as well. The best feature warm seats, automatic motion sensors to raise the lid, buttons to raise the seat, nightlights, self-cleaning mechanisms, music to mask unpleasant sounds, deodorizer spritzers and other conveniences.

"Paper just distributes the problem," said Lenora Campos, a spokeswoman for Georgia-based Toto USA. Toto, the Japanese company that pioneered the modern electronic toilet seat, has sold 34 million of them globally. "We wash most things with water and wouldn't dream of wiping a dish or anything else with a piece of paper and calling it clean. So why should personal hygiene be any different?"

Toto began marketing the Washlet in Japan in 1980. Now 74 percent of Japanese households have toilets of the high-tech persuasion, making them more common there than home computers.

The concept of electronic toilets that cleanse with water — widely known as bidet toilets or Washlets — has spread internationally over time, and dozens of companies around the world, including Inax, Brondell and Kohler, are producing them.

Although most popular in Asia, basic versions are becoming standard in much of the Middle East and South America, where cleansing with water has long been preferred to paper. They are finally becoming more popular in Europe, where "boudoir paper" was introduced in the 19th century, and in equally paper-centric North America.

They have been a long time coming.

In the U.S., "bidets were always seen as European, and an oddity of the French," said Rose George, author of "The Big Necessity: The Unmentionable World of Human Waste and Why It Matters" (Metropolitan Books, 2008).

In addition to general squeamishness about discussing the way we clean ourselves, some in the U.S. worried about the high-tech toilets' requirement that a grounded electrical outlet be nearby, or thought the early control panels made the toilets look clumsy.

That said, the predecessor to modern high-tech toilets was actually invented in the United States, by Arnold Cohen of Brooklyn, who patented a pedal-operated seat he'd designed as a sort of sophisticated sitz-bath to help his ailing father. He founded the American Bidet Company in 1964, marketing his product as an "American way to bidet" and "the first wash and dry toilet." But the subject was considered too vulgar for ads.

"I installed thousands of my seats all over the suburbs of New York, and we had offices all across the country," said Cohen, whose company still exists. "But advertising was a next-to-impossible challenge. Nobody wants to hear about Tushy Washing 101."

The place where his invention really took off was Japan. "I licensed to the Toto company and sent container after container to Japan," said Cohen, whose patent later expired.

Toto came up with a more sophisticated version and by 1980 had trademarked the Washlet. Sleek, electronic and no longer marketed as primarily a bidet, it became available in the U.S. in 1989. But it took another 20 years for mainstream American vendors like Home Depot and Lowes to embrace the technology and for prices to come down enough for average consumers.

"We bugged Home Depot and other stores for seven or eight years before they finally agreed to carry bidet toilets," said Steve Scheer, president of Brondell, a San Francisco-based company that has been making high-tech models like the Swash toilet seat since 2003.

Toto's top-of-the-line Neorest toilet, a tankless wonder with all the gizmos, comes out this fall priced at around $10,000. Most high-tech seats with important features such as a retractable wand and a drier cost between $450 and $1,800, and some basic water-cleansing models made by lesser-known companies now sell for under $40.

"It's a very experience-driven product, and is hard to explain to someone who's never tried a high-tech toilet. But the taboo is definitely beginning to lift," Scheer said. "People used to giggle and make jokes when I explained our products. Now a lot of people have heard about them or tried them and are more interested."

There are roughly 1.5 million high-tech seats in use in the United States, and millions more featuring more basic, non-electric, water-cleansing methods such as attachments and sprayers. Although high-tech toilets still account for a scant 1 percent of toilets in the U.S., Brondell and Toto both estimate growth in the high-tech segment at around 15 percent or more per year, and significantly higher than that in the last two years. And this despite minimal advertising.

Toilets at Google's California campus have been equipped with high-tech Toto seats, according to the company. And Brondell's Swash 1000 will be a standard option on Gulfstream's new G650 jets, Scheer said.

"A lot of times it starts when somebody buys one and then has some friends over for a dinner party. Their guests give it a try and then ask, 'Where in the world did you get that?'" said David Krakoff, head of sales for America of Toto USA.

So far, the seats seem most popular in larger cities on the East and West coasts, and in areas with large Hispanic populations. They seem to be gaining ground quickly among baby boomers and those who care for the elderly, as well as those interested in high-tech and environmentally friendly products.

Scheer said the new type of toilet uses much less water and electricity than is required to produce toilet paper. Because the water stream is small and aerated, each "use" of a high-tech seat requires under one- to two-tenths of a gallon of water, he said.

One high-tech seat adds around $50 to $60 to the average household's annual electric bill, but saves much more than that on the cost of toilet paper, the companies say.

Still, Krakoff warned that it is too soon to say good-bye to toilet paper.

"As much as I love these things, I would never say, 'Don't put paper next to your toilet,'" he said. "But if a roll used to last you two days, it will last you two weeks or so."