Lithium-ion batteries power tech gadgets from smartphones to electric cars, but they are also prone to overheating. 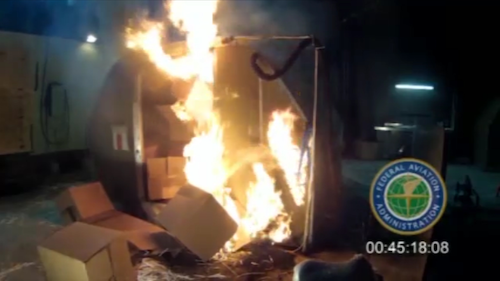 This file frame grab from video, provided by the Federal Aviation Administration (FAA) shows a test at the FAAs technical center in Atlantic City, N.J. last April, where a cargo container was packed with 5,000 rechargeable lithium-ion batteries. Officials say Jan. 27, 2016, a U.N. aviation panel is recommending a ban on shipping rechargeable batteries as cargo on passenger airliners because the batteries can create fires capable of destroying planes. (AP Photo/FAA, File)

A United Nations advisory panel is calling for a ban on bulk shipments of lithium-ion batteries aboard passenger planes.

Lithium-ion batteries power tech gadgets from smartphones to electric cars, but they are also prone to overheating.

Federal testing indicated that a single overheated battery could spread to the rest of a bulk shipment and cause uncontrolled fires or explosions in airplanes.

The commission's recommendation needs the approval of the full ICAO to take effect; the agency is scheduled to meet in late February.

The recommendation does not apply to cargo planes despite appeals from pilots groups. Three downed planes that killed their pilots were attributed to battery fires since 2006.

The ICAO rejected a complete ban on air shipments of lithium-ion batteries in October and the latest proposal would allow the ban to be lifted if future safety developments make the practice safe.

Battery manufacturers oppose such bans and argue that authorities should instead target irresponsible packaging practices in China and other nations.