A new poll reports that 66 percent of Americans are in favor of requiring food manufacturers to label any products that contain genetically modified organisms. That statistic is higher than the number of consumers who say it's important to know whether a food is organic. 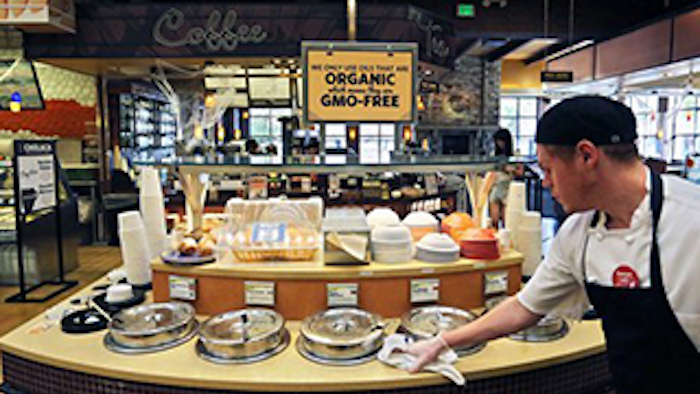 A new poll reports a large majority of Americans support putting labels on genetically modified foods, whether or not they care to eat them.

The Associated Press-GfK survey of 1,010 adults was conducted online Dec. 4-8, using a sample drawn from the GfK’s probability-based Knowledge Panel, which is designed to be representative of the U.S. population.

According to the results, 66 percent of Americans are in favor of requiring food manufacturers to label any products that contain genetically modified organisms — more readily known as GMOs. Only 7 percent are opposed to the idea, and 24 percent are “neutral.”

Yet, only 40 percent of respondents said the presence of GMOs in their foods was considered “very” or “extremely important” to them.

According to an Associated Press article by Mary Clare Jalonick, that statistic is higher than the number of consumers who say it’s important to know whether a food is organic.

In the article, the AP asks Andrew Chan, 41-year-old Seattle resident, about his thoughts surrounding the labeling initiative.

While Chan said he is in favor of labeling GMOs in food products, he said his top concern is really the amount of processed foods on the market.

“GMO ingredients aren’t the number one thing, but more than likely within a processed food I’d find something that is a genetically modified product,” Chan said.

Chan is not alone in his support of the initiative. More and more consumers are turning to natural and organic offerings of the same food. For many, the debate over GMOs is about the food industry overall.

As of late, the Food and Drug Administration does not yet require labeling of GMOs, but advocates who back the initiative say shoppers have the right to know what is in their food. Label supporters argue that not enough is known about their effects on the human body.

Although the U.S. has not required a nationwide label law on GMOs, many states are passing laws of their own. Last year, Vermont became the first state to require the labels. The law will take effect mid-2016, so long as it survives any legal challenges.

California, Washington and Oregon included the initiative on state ballots, but the labeling supporters were narrowly defeated. And any other states who began a ballot measure on the labels were quickly defeated by food industry giants.

Many food manufacturers are under constant pressure from their retailers as consumer awareness of GMOs has drastically increased in recent years. Whole Foods, for example, plans to label its GMO products in all of its U.S. and Canada stores by 2018.

So where do you stand on this important issue? Can GMO labeling benefit consumers? Why or why not? Are you a manufacturer who is struggling with sales because of the constant scrutiny of certain genetically modified ingredients in your food products? I’d like to hear from you; please comment below.