Inside the Kitchen, Cooking Apps Are All the Rage

Kevin Yu is the founder of SideChef, a cooking app that supplements recipes with social media. It's one of many apps that offer recipes, step-by-step videos, measurement conversion, timers, shopping lists and other elements meant to simplify our lives in the kitchen. 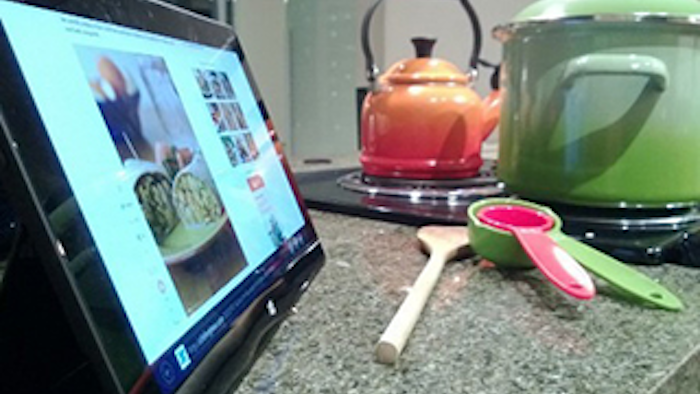 A few years ago, former video game executive Kevin Yu was cooking for a girlfriend on Valentine's Day when he discovered he'd forgotten the mushrooms for the mushroom soup. But that was just the start. He'd also lost track of timing on the various dishes, and he was just generally making a mess of things.

"I was trying to whip up a three course meal at the last minute and it ended up a disaster," Yu says. "She didn't leave me because of the cooking, but the cooking didn't help."

But does it surprise you that these days there's an app for that? The cooking part, anyway.

Yu is the founder of SideChef, a cooking app that supplements recipes with social media and aims to help home cooks avoid disasters like his. It's one of thousands of apps that offer recipes, step-by-step videos, measurement conversion, timers, shopping lists and other elements meant to simplify our lives in the kitchen.

But while apps have commandeered so many aspects of our lives, tracking our fitness, our sleep, our banking, our navigation, they have been slow to take over our kitchens.

"They haven't blown up yet," says Harrison Weber, news editor at VentureBeat.com, an online magazine that covers technology innovation. "It hasn't hit a tipping point in terms of usefulness and market need."

Digital cookbooks have notoriously failed in the publishing world, and account for a minuscule percentage of total cookbook sales. But developers argue that apps are not just another platform for digital recipes. Apps, they say, offer convenience, portability and, at their best, a new way of interacting with the information.

Some of the earliest cooking apps were extensions of popular cookbooks. In 2011, baking expert Dorie Greenspan helped create a companion app to her book "Baking with Dorie" that used video to walk users through the recipes. Portland, Oregon-based app developer Culinate offers similarly interactive apps for books such as Mark Bittman's "How to Cook Everything."

The most popular apps today are the ones that build on trends, such as gluten-free or vegan recipes, says Fiona O'Donnell, a lifestyles analyst at Chicago-based market research firm Mintel, or on products that already have a large following, such as Allrecipes.com and Epicurious.com. The Food Network's "In the Kitchen" app, which features recipes and videos from the network's celebrity chefs, boasts more than 5 million downloads.

Many cooking and other apps also follow the principles of "gamification," applying the social media, build-your-own environment and other principles of video games. Yu, a former community development executive for the game World of Warcraft, says his SideChef app will offer similar aspects of community.

But apps won't change the way we shop, cook and eat, say analysts and app developers, until they fully integrate every step of the process, from deciding what to make, to delivering a recipe, its ingredients and "smart" appliances with which to cook it.

"People want to integrate everything in their lives," says Mintel's O'Donnell. "In the smart home you have your refrigerator that tells you what food you have, when your milk is going to expire. The next evolution will be a cooking app that can integrate with your other household appliances or neighborhood. 'Here's a great recipe, and here's where you can get the ingredients.' That will be next tech evolution."

Such change is already beginning. The recipe website Yummly.com has connected its app with the online grocery delivery service Instacart to allow consumers to choose a recipe and have the ingredients delivered to them in an hour or less. Other apps have begun syncing with individual appliances. The Prep Pad, a Bluetooth-enabled scale by The Orange Chef Co., links to an app that displays in real time the calories and other nutritional information of every item you're loading onto your plate or into your spaghetti sauce.

"A lot of the food-tracking apps are generic," says Taimoor Dar, co-founder of San Francisco-based Orange Chef. "We give you component by component. And you can be like 'Maybe this is too much fat' or 'Maybe there's not enough protein.' That's our focus, to give you real-time insight into your food. It's not just about the tracking aspect. It's about how can you make a change right away."

Analysts and app developers say apps will come into their own as smart kitchens become as commonplace as smart TVs.

"Every major appliance maker is probably thinking about smart kitchens already," says VentureBeat's Weber. "It's like the driverless car. We have the technology already for the immediate things we'd build. But making that interface work just right, making it beautiful, affordable and integrating it with the rest of your life, no one's figured out how to do that."

Michele Kayal is co-founder of AmericanFoodRoots.com