California regulators on Monday proposed a first-of-its-kind, $1.5 million fine for a group of Central Valley farmers accused of illegally taking water during the drought. It would be the first such fine against an individual or district with claims to water that are more than a century-old, known as senior water rights holders. 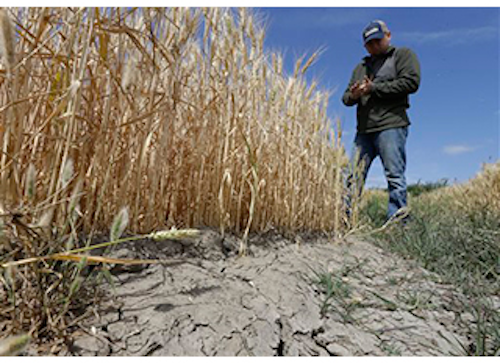 It would be the first such fine against an individual or district with claims to water that are more than a century-old, known as senior water rights holders.

The action reflects the rising severity of California's four-year drought that has prompted the state to demand cutbacks from those historically sheltered from mandatory conservation.

The State Water Resources Control Board said the Byron-Bethany Irrigation District in the eastern San Francisco Bay Area illegally took water from a pumping plant even after it was warned in June that there wasn't enough water legally available.

Relying on water rights dating to 1914, the district serves 160 farming families in three counties in the agriculture-rich Central Valley and a residential community of 12,000 people. The district estimates losing $65 million in crops because of the state's cutback orders.

District general manager Rick Gilmore said he did not know a penalty was coming and wasn't aware of the details. The water that the state believes was taken might have been supplemental supplies purchased by the district, he said.

The district has sued the state over the board's June warning to immediately stop taking water because the watershed was running too dry to meet demand.

The board has sent out more than 9,000 notices across parched California warning there wasn't enough water entitled under rights.

State inspectors have conducted about 1,200 investigations in the last year but only cracked down involving two. Officials say Byron-Bethany was targeted because it was publicly defying the board and diverting water in the drought.

State officials anticipate cracking down on more districts and individuals this summer.

"Our resources are somewhat limited here, and we are taking our cases as we can get them and as we can develop them," said Andrew Tauriainen, a prosecutor for the water board.

Byron-Bethany has 20 days to request a hearing before the water board to contest the fine, although it's unclear how long it could take to resolve the case. The maximum penalty the five-member board could assess in the case is $5 million, depending on how the water was used.

The water board also issued a cease-and-desist order last week against the West Side Irrigation District to immediately stop taking water. That district also had filed a lawsuit challenging the board's cuts, but the state denies it's retaliating against the agency.

Courts have not yet settled the question of whether the board has authority to demand cutbacks from farmers, cities and individuals with California's oldest claims to water.