Researchers measured milk consumption by children and found that when chocolate milk was removed from schools, the overall consumption dropped drastically by about 41 percent. Additionally, of the students who chose plain milk, there was a greater amount of milk wasted. 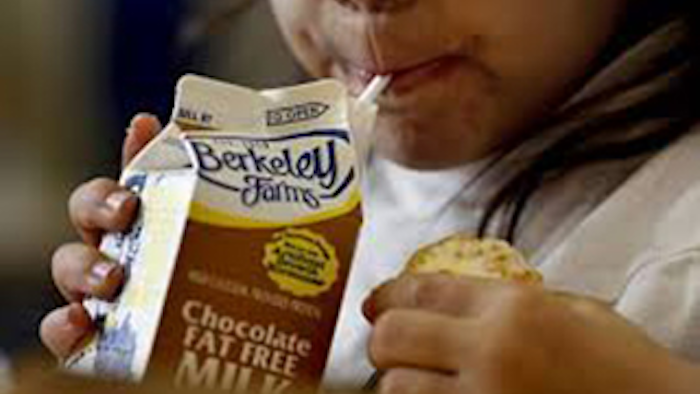 Researchers from the College of Pharmacy and Nutrition, University of Saskatchewan measured milk consumption (plain milk and flavoured milk) by children in a sample of Saskatoon elementary schools. This is the first study in a Canadian elementary school population to investigate the impact of removing chocolate milk from schools.

Studies show that milk is very important for children's health as it contain many nutrients for growth and development. Sufficient amounts of calcium and vitamin D are required during childhood and adolescence because a significant amount of adult bone mass is accrued during this time. Milk is a good source of these nutrients as well as other important nutrients. Unfortunately without school-based milk programs, children are not likely getting enough.

Current policies in many schools have led to the removal of flavoured milk because of the amount of added sugar. However, this research shows that when flavoured milk is removed from the school, total milk intake drops by nearly half.

In this study, researchers used nutrient modelling to replace what was lost when children stopped drinking milk, and found that combinations of foods tested were not feasible due to cost and the number of additional foods needed to replace the missing nutrients.

While some schools may limit access to flavoured milk, presumably due to concerns that these beverages may provide unhealthy levels of added sugars and fat, the study showed that a very low number of children are drinking milk in school, the numbers dropped significantly (41%) when flavoured milk was removed. Additionally, of the students who chose plain milk there was a greater amount of milk wasted. Given children's preferential intake of chocolate milk further studies into whether children will accept lower sugar formulations need to be investigated. The authors suggest that policies should be in place to promote drinking milk rather than limiting it.

The study "Impact of the removal of chocolate milk from school milk programs for children in Saskatoon Canada" was published in the journal Applied Physiology, Nutrition, and Metabolismtoday.