Drink Up: Study Says Compound in Beer Can Ward Off Alzheimer's

Who says beer isn't good for you? Science says it is! According to researchers, beer doesn't just satisfy your taste buds and get you drunk, it also is quite healthful. The solution to help guard these cells from damage? Xanthohumol. 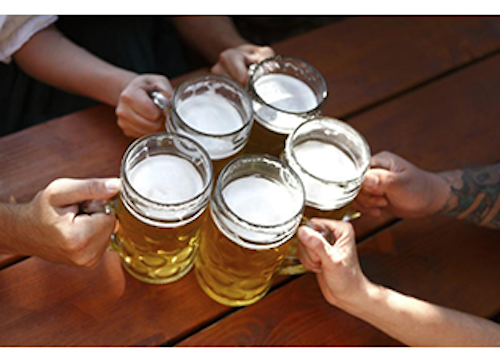 Who says beer isn't good for you? Science says it is!

There seems to constantly be new studies coming out about the health benefits wine can provide. But what about beer?

Scientists reported in the American Chemical Society's Journal of Agricultural and Food Chemistry that a compound from hops could protect brain cells from damage.

According to researchers, beer doesn't just satisfy your taste buds and get you drunk, it also is quite healthful.

Potentially, this beverage can help slow the development of disorders such as Alzheimer's and Parkinson's diseases. I'll drink to that!

Jianguo Fang and his colleagues found evidence suggesting that oxidative damage to neuronal cells is a big contributor in diseases that originiate in the brain.

The solution to help guard these cells from damage? Xanthohumol.

Scientists said this compound is found in hops — a main ingredient in many beers — and might just help prevent or slow down neurodegenerative conditions.

This specific compound has gotten the attention of researchers due to its potential benefits, including antioxidation, cardiovasclar protection and anticancer properties.

Naturally, the team of researchers decided to test xanthohumol's effects on brain cells. The results proved that the compound could protect neuronal cells and slow the development of brain disorders.

The research team concluded that xanthohumol could be a "good candidate for fighting such conditions."