Vermont has made a name for itself in the national farm-to-school movement getting more locally raised foods into school cafeterias and curriculum about nutrition and agriculture into classrooms. 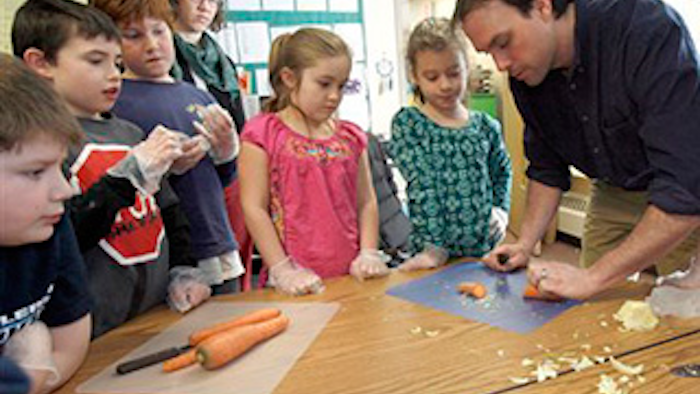 MONTPELIER, Vt. (AP) — Vermont has made a name for itself in the national farm-to-school movement getting more locally raised foods into school cafeterias and curriculum about nutrition and agriculture into classrooms.

Now the state will serve as a classroom of its own to 13 schools around the Northeast and others who want to learn more about Vermont's model and develop their own farm-to-school plans.

The Northeast Farm to School Institute takes place Wednesday through Friday at Shelburne Farms, located on the shores of Lake Champlain. It's funded by a $100,000 U.S. Department of Agriculture grant, which also covers a year of mentoring to schools by coaches after the workshop.

The institute will focus on professional development in order to design a more integrated curriculum that includes food, farm and nutrition in all aspects of student learning, said Betsy Rosenbluth, project director for Vermont FEED, an organization that works with schools and communities to raise awareness about healthy food, Vermont farms and good nutrition.

Sometimes a food service director develops partnerships with farmers. In Richmond, Vermont, for example, a school bought a cow so locally raised ground beef could be used in the cafeteria. The kids visited the farm as part of their studies. Parents sold the finer cuts of meat to pay the cost of using the local meat in the school meal program.

"So it was a really integrative and pretty innovative approach to farm to school and that happens when teams are working together and not just training a teacher or training a food service or talking with a principal but when they together as a group get to tap each other and build a program that goes schoolwide," Rosenbluth said.

Representatives from schools in Maine, Massachusetts, New Hampshire, New York and Vermont as well as farm-to-school representatives who are supporting three other states plan to attend the institute. Schools will leave the institute with their own action plans.

Vermont is one of nine states where more than 75 percent of school districts participated in farm-to-school activities in the 2011-2012 school year, according to the USDA census. Updated census data is expected to come out in the fall.

A Farm to School program was created within the USDA as part of the Healthy, Hunger-Free Kids Act of 2010 to improve access to local foods in schools.

Lisa Damon, the western Massachusetts program director for Massachusetts Farm to School, will attend the institute. Her state has expertise in procuring locally raised food for school cafeterias but wants to expand the program to include school curriculum, school gardens and the greater school community, said Damon, who will serve as a coach for the Monument Valley Regional Middle School in Great Barrington.

"Vermont FEED has been doing this for a number of years and they have a great model up there," she said. "And so we're looking to learn from this institute about expanding that work to a more holistic approach."