Restaurant owners say eating dog meat is traditional during the summer, while animal rights activists say the festival has no cultural value and was merely invented to drum up business. As many as 10,000 dogs, many of them stolen pets, are slaughtered for the festival. 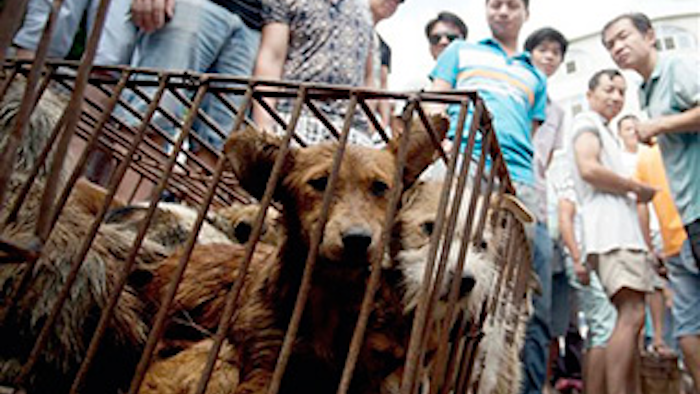 BEIJING (AP) — Restaurateurs in a southern Chinese town held an annual dog meat festival Monday despite international criticism of the event as cruel and unhygienic.

The Yulin government distanced itself from the festival and announced new restrictions, but eateries reached by telephone reported brisk business during the event ostensibly held to mark the summer solstice.

Restaurant owners say eating dog meat is traditional during the summer, while animal rights activists say the festival has no cultural value and was merely invented to drum up business.

As many as 10,000 dogs, many of them stolen pets, are slaughtered for the festival held deep inside the largely rural and poor Guangxi Zhuang Autonomous Region.

Adam Parascandola, director of animal protection and crisis response at the Washington D.C.-based charity Humane Society International, said he and Chinese activists had witnessed dogs being maltreated in a Yulin slaughterhouse on Sunday morning.

"A man would go in the cage with a club and just start clubbing the dogs, just beating them and beating them, not killing them at that point ... the dogs are screaming and trying to get away and it's really heartbreaking."

He said he was struck by "the huge variety of breeds" of live dogs, delivered on the backs of scooters and trucks, on sale at a market. "I saw a Dalmatian and a chow and many dogs wearing collars that indicated the likelihood they were stolen pets," he said.

Apparently concerned about the adverse publicity, the local government disavows any ties to the event, issuing a statement saying it did not officially sponsor or promote the festival. It said authorities would tightly control public order and punish any incidents of stealing or poisoning dogs. Traders would no longer be permitted to slaughter dogs in public, place carcasses on display or serve meals outdoors, it said.

Despite such restrictions, restaurant owners said the festival continued to attract enthusiasts for the dish.

"Eating dog meat is a local tradition, it has nothing to do with the local government," said a receptionist at the Longmen Dog Meat Restaurant reached by phone.

Parascandola said he had met people who had traveled to Yulin to try and save dogs by buying them, but that the festival was proving popular and there were lines outside many of the restaurants as people waited for seats.

Celebrities such as British comedian Ricky Gervais and Brazilian supermodel Gisele Bundchen have called for an end to the festival, and more than 3 million people have signed petitions protesting it, according to Shareeza Bhola, communications manager for change.org.

Dog lover Yang Xiaoyun traveled from her hometown, Tianjin, in northern China to Yulin and spent about 7,000 yuan ($1,150) over the weekend buying up 100 dogs at a market to save them, news website 163.com reported.

Dog is eaten in some parts of China but is not a common dish. Owning dogs as pets was discouraged under early Communist Party rule but has become increasingly popular among the Chinese public, especially the urban middle class.