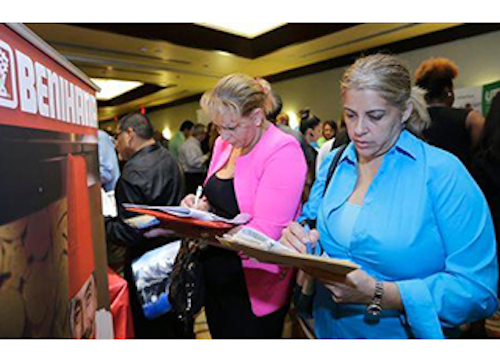 The latest state and regional estimates from the federal Bureau of Labor Statistics, by contrast, showed only four states with rising unemployment rates in December compared to the previous month, while four states matched their November rates.

Idaho and Vermont saw the largest declines in employment at 0.4 percent, followed by 0.2 percent decreases in Delaware, Minnesota and New Mexico.

The numbers were even better when compared to the same month in 2013. Forty-six states and the District of Columbia saw lower unemployment rates compared to last December, while two saw no change and two saw unemployment increases.

North Dakota led all states with a 2.8 percent unemployment rate in December, though there are concerns about theimpact of sharply declining oil prices on the state's booming shale gas industry. Mississippi, meanwhile, had the highest unemployment rate at 7.2 percent.

The estimates followed a BLS report showing the country as a whole gaining more than 250,000 jobs in December, wrapping up the nation's best year for hiring since 1999. Employment increased in all 50 states compared to the end of 2013, with North Dakota, Texas and Utah reporting the strongest gains.

Manufacturing played a key role in those job gains last year, with BLS numbers showing an average increase of 16,000 manufacturing jobs per month. Those jobs took on added importance in light of tepid wage gains last year; a recent report showed the average manufacturing worker made nearly 11 percent more than a comparable worker outside the sector in 2012 and 2013.