Wal-Mart's push to get its suppliers to give farm animals fewer antibiotics and more room to roam is expected to have a big impact on the food industry, experts say. Though the steps are voluntary, Wal-Mart, which sells more food than any other store, has a history of using its retail muscle to change the way products are made and sold across the retail industry. 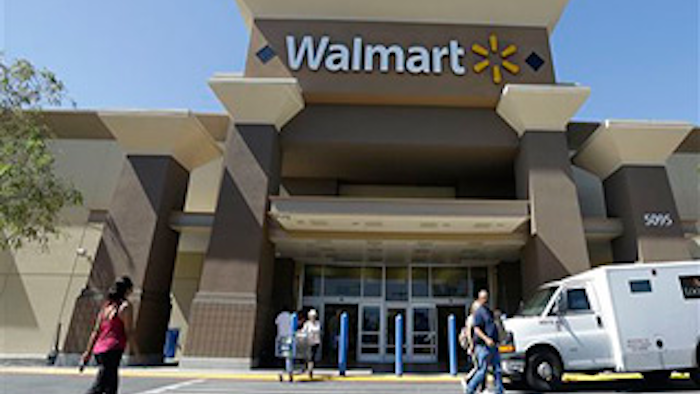 NEW YORK (AP) — Wal-Mart's push to get its suppliers to give farm animals fewer antibiotics and more room to roam is expected to have a big impact on the food industry, experts say.

Though the steps are voluntary, Wal-Mart, which sells more food than any other store, has a history of using its retail muscle to change the way products are made and sold across the retail industry.

Wal-Mart told The Associated Press that it's asking meat producers, eggs suppliers and others to use antibiotics only for disease prevention or treatment, not to fatten their animals, a common industry practice.

The guidelines also aim to get suppliers to stop using pig gestation crates and other housing that doesn't give animals enough space. They're also being asked to avoid painful procedures like de-horning or castration without proper painkillers.

Other major companies, including McDonald's Corp., Nestle and Starbucks Corp., have already pledged to reduce or eliminate the use of gestation crates for pregnant sows and otherwise improve animal treatment. But activists hailed Wal-Mart's steps and said its guidelines would be one of the most sweeping and could become the blueprint for the food industry.

Concerns are growing that antibiotic overuse is leading germs to develop resistance to the drugs, making diseases more difficult to treat.

Shoppers are also driving changes. They want to know more about where their food comes from and are choosing foods they see as more healthy or natural.

Activists have reported animal abuse at farms supplying Wal-Mart and other major companies, launched petition campaigns and staged protests at its stores.

Kathleen McLaughlin, senior vice president of Wal-Mart's sustainability division, said Wal-Mart wants suppliers to produce annual reports on antibiotic use and animal welfare and post them on their own websites. It's also pressuring suppliers to report animal abuse to authorities and take disciplinary action.

"This is a historic and landmark day for the protection of farmed animals in America," said Nathan Runkle, president of Mercy for Animals, an animal rights group that has pressed Wal-Mart for change. "We urge Wal-Mart to add greater teeth to this announcement by making the new guidelines a requirement rather than a mere recommendation and to set aggressive deadlines."

Still, Wal-Mart's size — it accounts for 25 percent of the U.S. food business — gives it outsized influence on its suppliers' practices.

When Wal-Mart asked its suppliers to reduce packaging about a decade ago, it spurred innovations. Procter & Gamble introduced tubes of Crest toothpaste that could be stood upright on shelves without boxes.

"We think what's needed is a fresh look at how we can look at producing food. This is an industrywide change. It won't happen overnight," Wal-Mart's McLaughlin said. "It's about transparency."

Wal-Mart said it has adopted the "five freedoms" outlined by the World Organization for Animal Health to guide its approach to animal welfare. They include freedom from pain and injury and freedom to express normal behavior.

Wayne Pacelle, president and CEO of The Humane Society of the United States, called that "game-changing progress and signals to agribusiness that the era of confining farm animals is ending."

Dr. Gail Hansen, a former practicing veterinarian and a senior officer of Pew Charitable Trusts' antibiotic resistance project, called Wal-Mart's move to curb the use of antibiotics a "big deal."

Wal-Mart is asking its suppliers to keep accurate records of antibiotic use and have vets make sure antibiotics aren't given strictly to fatten up animals.

"This will help us understand how antibiotics are being used in food production," Hansen said. Federal regulators keep an overall tally of antibiotic use but don't require detailed recordkeeping, she said.

The guidelines apply to suppliers of both Wal-Mart and Sam's Club stores.

Mercy for Animals has conducted six investigations over the past few years on farms that supply pork to Wal-Mart. It found many instances of pigs being hit and punched with metal cans, according to Ari Solomon, a spokesman for the group.

The group leaked a video of mistreatment at an Oklahoma hog farm in 2013. In that video, pigs were seen being pummeled with sheets of wood, and pregnant sows were caged in such small spaces they could barely move. After that, Tyson Foods and Wal-Mart terminated the contract with the supplier.

In July 2014, Wal-Mart announced it was requiring its fresh pork suppliers to have video monitoring for sow farms and would be subject to unannounced animal welfare video audits by a third party.

Wal-Mart spokesman Kevin Gardner said that requirement wasn't in reaction to the video, but to "address the industry topic in general."

Tyson, one of the nation's largest meat producers, plans to eliminate the use of human antibiotics in its U.S. broiler chicken flocks by the end of September 2017. It's also encouraging hog farmers to focus on the quality and quantity of the space for sows when they remodel or build new barns, though it hasn't set a timeframe.