Wonder bread could start appearing in school lunchboxes again soon. A person familiar with the situation says a bid by Flowers Foods to buy Wonder and several other bread brands from bankrupt Hostess was met with no qualifying competing offers. The individual requested anonymity because the auction process is private. 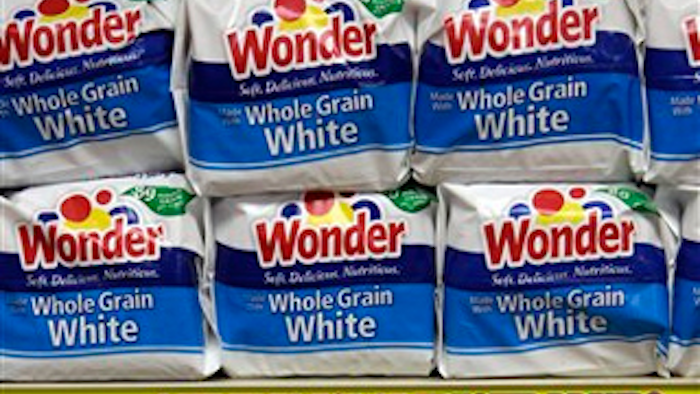 A person familiar with the situation says a bid by Flowers Foods to buy Wonder and several other bread brands from bankrupt Hostess was met with no qualifying competing offers. The individual requested anonymity because the auction process is private.

Hostess hasn't been making any of its cakes and breads since late November, when the company announced it was going out of business and closed its plants following years of financial struggles. The shuttering included the loss of about 18,000 jobs.

The $360 million bid by Flowers also includes Nature's Pride, Butternut, Home Pride and Merita breads, along with 20 bakeries and 38 depots. An auction will still be held Thursday for a separate $30 million bid by Flowers for Beefsteak. The source said a competing offer for that brand was submitted by Mexico's Grupo Bimbo, which makes Thomas' English muffins and Entenmann's cakes.

Any sales would be subject to approval by a bankruptcy court on March 19.

Hostess has also picked opening bidders, known as a "stalking horse," for its snack cakes. A joint offer from two investment firms — Metropoulos & Co. and Apollo Global Management LLC — was picked as the lead bid for Twinkies and other snack cakes. Hostess CEO Greg Rayburn has said he expects that auction to be "wild and wooly."

McKee Foods, which makes Little Debbie snack cakes, was picked as the lead bidder for Drake's cakes, which include Devil Dogs, Funny Bones and Yodels. The deadline to submit competing offers for the snack cakes isn't until mid-March.

Flowers Foods, based in Thomasville, Ga., makes Tastykakes and breads including Nature's Own. Representatives for Flowers Food and Grupo Bimbo did not immediately return calls for comment.

Taken together, Hostess has said its six bread brands generated just under $1 billion in sales last year, with Wonder bread accounting for about half of that. Flower Foods, which generates about $3 billion in annual sales, said it expects the deals to add to its earning this year. The company plans to finance the deal through a mix of cash and debt.

In a bankruptcy court filing Monday, Hostess' second largest union objected to the sale of the breads, noting that Flowers Foods "has not committed to preserve a single job."

The Bakery, Confectionery, Tobacco Workers and Grain Millers International Union said that while the bid may be optimal for the company's lenders, it provides "zero assurances" that the rights of workers would be protected.