US Trade Deficit in April Hits $47.2B

While exports dropped for the fourth month, imports climbed to an all-time high of $240.6 billion, reflecting record shipment levels of food and other goods. The cold winter partly explains why the U.S. is importing more and exporting less. 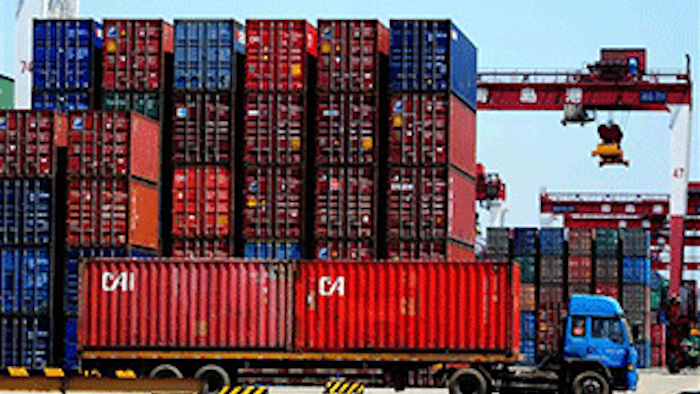 WASHINGTON (AP) — The U.S. trade deficit jumped to a two-year high in April, as exports declined and imports surged to a record high.

The deficit rose to $47.2 billion in April, up 6.9 percent from an upwardly revised March deficit of $44.2 billion, the Commerce Department said Wednesday.

Exports dropped for the fourth month out of the past five, falling 0.2 percent to $195.4 billion. Meanwhile, imports climbed 1.2 percent to an all-time high of $240.6 billion, reflecting record shipment levels of foreign-made cars, food, computers and other goods.

A wider trade deficit can act as a drag on growth because it means U.S. companies are earning less from their overseas markets. But it could also indicate rising U.S. demand as the country shakes off the effects of a harsh winter.

"We're obviously wary of falling back on using the weather as an excuse again, but the extreme cold winter, coupled with the drought in California, does partly explain why the U.S. is suddenly importing a lot more food and exporting less," said Paul Ashworth, chief U.S. economist at Capital Economics.

In 2013, the trade deficit declined by 11.4 percent to $476.4 billion. The result was led in part by a boom in U.S. energy production that cut America's dependence on foreign oil while boosting petroleum exports to a record high.

A larger trade gap in the first three months of this year compared to the fourth quarter shaved nearly a full percentage point from growth. Gross domestic product shrank at an annual rate of 1 percent in the first quarter, also hurt by less business stocking of store shelves and a severe winter that disrupted consumer spending and factory production.

But economists expect a strong bounce back in the current April-June quarter. Some estimate that growth could hover around 3.8 percent as the trade deficit narrows and stronger hiring boosts household incomes and consumer spending. However, the bigger-than-expected trade deficit in April may cause analysts to trim those forecasts a bit.

Many analysts say growth will remain strong at a rate around 3 percent in the second half of the year.

The deficit with the 28-nation European Union hit a monthly record of $14 billion in April as imports from that region hit an all-time high.

America's trade gap with China jumped 33.7 percent to $27.3 billion in April, the largest gap since January. The U.S. deficit with China is the largest with any country, and this year's imbalance is running ahead of last year's record pace. That is putting pressure on the Obama administration to take a tougher stand on what critics see as unfair trade practices by China.

They say Beijing is manipulating its currency to keep it undervalued against the dollar. That makes Chinese goods cheaper in the United States and American products more expensive in China.

The administration last month announced it had won a major victory before the Geneva-based World Trade Organization in a case in which the United States had challenged China's imposition of penalty tariffs on the sale of $5 billion in U.S.-made vehicles in China.

Also in May, the Justice Department charged five Chinese military officers with hacking into U.S. companies' computer systems to steal trade secrets. The case was viewed as evidence of the increased commercial strains between the world's two biggest economies.