Lakemaid Beer recently tested its drone delivery system by flying a 12-pack of its brew to anglers on central Minnesota's Lake Mille Lacs. The craft brewer says it still has hopes of one day using the drones to deliver its beer to ice fishers, despite being grounded by federal aviation officials. 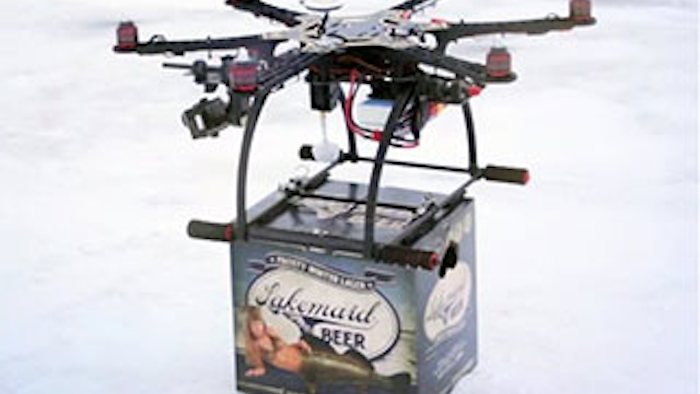 MILWAUKEE (AP) — A craft brewer still has hopes of one day using drones to deliver its lager to ice fishing anglers on Minnesota lakes by air, despite being grounded by federal aviation officials after a recent test run.

Lakemaid Beer recently tested its delivery system by flying a 12-pack of its brew to anglers on central Minnesota's Lake Mille Lacs. A video of the experiment posted online showed a small unmanned aerial system, or drone, not much bigger than the beer it carried flying over the head of a curious onlooker, landing on an iced-over lake and setting the beer down in front of a fishing shanty.

Supple thought the idea could work well in a wide open space with drones programmed to deliver the beer, which is brewed in Stevens Point, Wis., to specific coordinates.

"We could actually do that on a frozen lake," Supple said Friday. "They (anglers) know their GPS coordinates because they know their favorite spots."

But Supple said an FAA inspector heard him talking about his delivery plan on the radio and soon a stack of regulatory information arrived, including a document titled "Integration of Civil Unmanned Aircraft System in the National Air Space System Roadmap." The Federal Aviation Administration has barred drone use for commercial purposes since 2007.

FAA spokeswoman Elizabeth Isham Cory said Friday that she couldn't confirm that Supple's radio interview had tipped off an inspector, but noted his video was all over the Internet.

She said she couldn't quantify the number of cases where the FAA has had to step in on commercial use of drones, but that it happens nationwide.

"There's a lot of people who want to use them for real estate or photography," she said.

The FAA recently announced six test sites around the country that will conduct research into certification and operational requirements for integrating the drones. The agency expects to publish proposed rules for small unmanned aerial systems later this year, Isham Cory said.

Until then, Supple said he hopes to scope out drone ports around Minnesota lakes that he can use in the future.

"When they figure it out, we'll be ahead of the curve," he said.