Taco Bell wants to become destination for snack-starved younger people, not just a place to get burritos for lunch or dinner. The Mexican-style chain plans to announce this week an expansion of its sweet treats menu, with the addition of churros and cookie sandwiches to its current lineup of cinnamon twists and caramel apple empanadas. 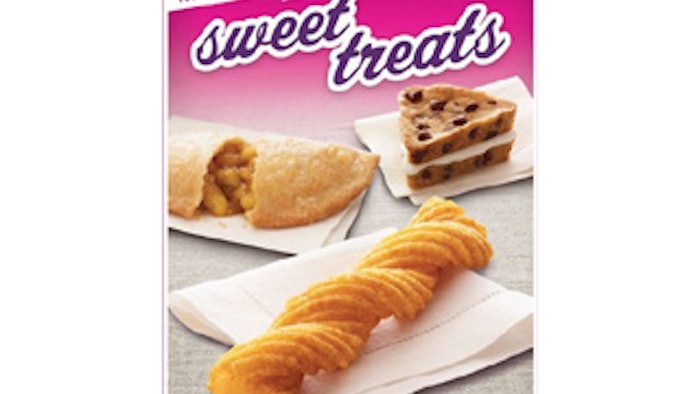 NEW YORK (AP) — Taco Bell wants to become destination for snack-starved younger people, not just a place to get burritos for lunch or dinner.

The Mexican-style chain plans to announce this week an expansion of its sweet treats menu, with the addition of churros and cookie sandwiches to its current lineup of cinnamon twists and caramel apple empanadas. And in coming weeks, it will beef up its offering of savory snacks with the introduction of its "loaded grillers," which are nachos, chicken or loaded baked potato wrapped in a tortilla.

The move follows a broader trend in the fast-food industry, with companies trying to find new ways to attract customers at all hours of the day. McDonald's, for example, has seen great success in recent years in large part because of the introduction of its snack wraps in 2006, specialty coffee drinks in 2009 and fruit smoothies in 2010. Burger King followed suit this year with its own snack wraps, specialty coffees and smoothies, and Wendy's is testing specialty coffees in select markets.

Attracting customers to restaurants during those between-meal hours has become a critical way to drive sales, because chains have to pay for fixed costs such as electricity and labor anyway. The strategy is particularly relevant for Taco Bell, because its younger customer base tends to snack around the clock, said Brian Niccol, Taco Bell's chief marketing officer.

"They are on a timeless eating schedule," he said.

Earlier this year, the company also began testing a breakfast menu in select markets. Taco Bell says the breakfast menu — which it refers to as "FirstMeal" —could go national by 2014. It already touts a "FourthMeal" for those craving a late-night hit of junk food.

For now, Niccol said customers are ordering the cinnamon twists and caramel apple empanadas more as desserts to go with meals. But by early next year, Niccol said the sweet treats will be marketed as snacks for any time of day, perhaps to go along with one of its specialty drinks.

The more aggressive courtship of junk food-loving younger people comes even as Taco Bell also seeks to expand its customer base with it higher-end Cantina Bell bowls and burritos, which executives have said bring in more women. In the third quarter, Taco Bell said the new Cantina Bell items helped lift sales at restaurants open at least a year by 7 percent.

Without naming Chipotle Mexican Grill Inc., Yum Brands Inc. President Richard Carucci said in a conference call with investors last month that fast casual chains taught the company an important lesson — that people are willing to spend more money for higher-quality food, if it can be delivered quickly and conveniently.

As such, Taco Bell will also announce plans to extend its Cantina Bell line, with a test of a steak quesadilla for $4.99 in Charlotte, N.C.