As employees return to work Thursday at a chicken-processing plant that was the scene of a fatal workplace shooting, authorities and co-workers puzzled over what set off an ex-convict whose record had included mostly nonviolent crimes. Lawrence Nathaniel Jones, 42, had been in and out of prison since 1991 for crimes ranging from armed robbery to a car theft. 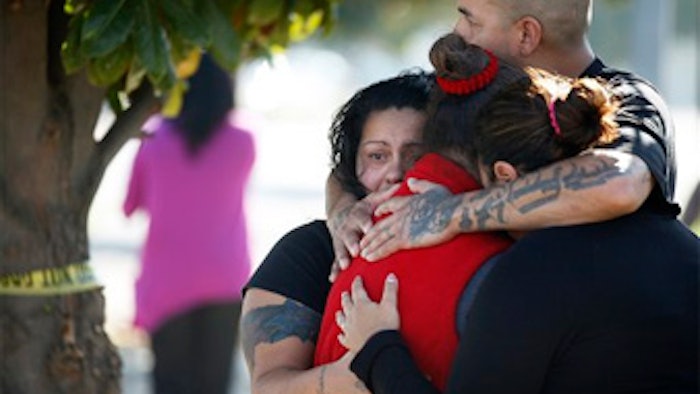 FRESNO, Calif. (AP) — As employees return to work Thursday at a chicken-processing plant that was the scene of a fatal workplace shooting, authorities and co-workers puzzled over what set off an ex-convict whose record had included mostly nonviolent crimes.

Lawrence Nathaniel Jones, 42, had been in and out of prison since 1991 for crimes ranging from armed robbery to a car theft. A neighbor described him as intimidating, but a co-worker and his boss called him nice and respectful.

On Tuesday, in the middle of his morning shift, Jones pulled out a gun and opened fire on four co-workers, killing two execution-style, authorities said. Two others were wounded, and he later died after shooting himself in the head.

"Nothing seemed out of the ordinary that day, or any day," Bob Coyle, president and owner of the Valley Protein plant, said employees told him. "There were no arguments that ensued, nothing that led up to it. It's a horrific, random act of violence."

Those who knew him offered conflicting accounts of a man who had a criminal history but appeared to have straightened out his life. Neighbors at his apartment building told the Fresno Bee he had been there for a few months and did not speak to anyone.

"He never smiled or even looked at you. He was intimidating," said Manny Anguiano, who lived two doors down from Jones. "He just rode in on his bike and rode out."

Coyle said Jones never showed any signs of trouble and was always respectful. He was recently given a perfect attendance award.

"He was top of the list," Michelle Coyle said. "We knew he did not have a violent criminal past. We try to give people a second chance at life."

On Wednesday, the company brought in grievance counselors for employees, some of whom walked out wiping away tears and hugging each other. They were expected to return to work Thursday after the U.S. Department of Agriculture inspected the facility and gave the go-ahead for it to reopen, Coyle said.

Jones had worked at the plant for 14 months before the shooting Tuesday. Authorities said he methodically shot his first three victims by placing a gun against their head or neck. Police said the gunshots were drowned out by the machinery and ear protectors used by the workers who dice, slice, grind and cook chicken.

He shot a woman who tried to flee, and then put the gun to one more person's head and pulled the trigger, but the gun was out of bullets, according to police.

Coyle said Jones was then confronted by a plant manager. He left the building, reloaded, and shot himself to death.

Manuel Verdin, 34, and Salvador Diaz, 32, were killed in the shooting. Arnulfo Conrriguez, 28, was listed in critical condition Wednesday at Fresno's Community Regional Medical Center, a hospital spokeswoman said. Fatima Lopez, who witnessed the slayings and was shot as she started to run, was treated and released.

Coyle said Diaz started working at Valley Protein in June, while the two other victims started a week ago. The Associated Press was unable to reach family members of Jones and the victims.

Jones' extensive criminal history dates back to 1991, authorities said. In 1994, he was sentenced to 13 years in prison for robbery, then released on parole in 2001, according to the California Department of Corrections and Rehabilitation.

Jones had also served time for robbery and, later, for vehicle theft and other convictions. He was last paroled in June 2011, the department said.

"He was reviewed and he had not had any violations and so he was discharged from parole" this past May, said department spokesman Luis Patino.

Patino said a common condition of being discharged from parole is having a job. "We want to make sure they can reintegrate into society and support themselves," he said.

With brands from Almay to Elizabeth Arden, Revlon had been a mainstay on store shelves for decades.
Jun 16th, 2022
Follow Us
Most Recent