Mira Winery of St. Helena, Calif., placed the bottles of wine in yellow steel mesh cages and then submerged them offshore in an undisclosed location. In three months, the wine will be removed and subjected to chemical tests and tasting by experts to see what differences it has from wine aged on land. The winery could produce and sell underwater-aged wine in the future if the trial goes well. 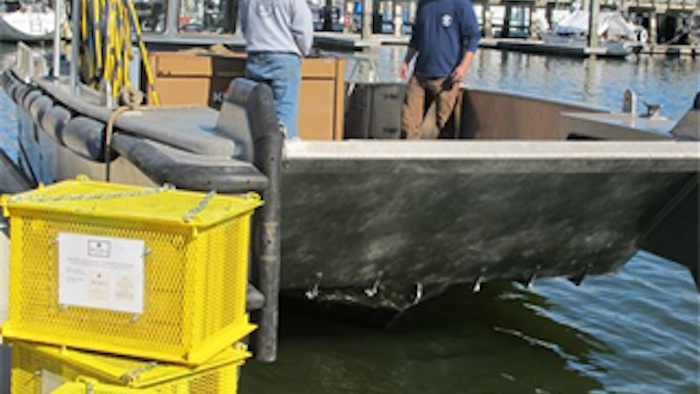 CHARLESTON, S.C. (AP) — An experiment in the age-old art of winemaking began on Wednesday as a California winery submerged four cases of Cabernet Sauvignon in Charleston Harbor to see how the ocean affects the aging of the wine.

Mira Winery of St. Helena, Calif., placed the bottles of wine in yellow steel mesh cages and then submerged them offshore in an undisclosed location. In three months, the wine will be removed and subjected to chemical tests and tasting by experts to see what differences it has from wine aged on land. The winery could produce and sell underwater-aged wine in the future if the trial goes well.

While wineries in Europe have experimented in recent years with ocean aging of wine, the idea is novel in the United States, said Jim "Bear" Dyke Jr., the Charleston resident who owns the Napa Valley winery. At least a handful of European wineries have produced underwater-aged wine, some of which has been sold in the U.S.

Winemakers have long known wine recovered from sunken ships has a unique taste and the ocean is thought to have something to do with that.

Dyke and his colleagues expect the water pressure, temperature and gentle swaying from currents to produce unique effects. He would not specify the depth of the water in which the wine will be submerged.

"This is a very exciting thing for me as a winemaker," said Gustavo Gonzalez, Mira's winemaker. "When you make wine it's pretty much the same thing for everybody. You can change it up a bit but and see what happens and your cabernet may taste a little bit different from your neighbor's cabernet."

The idea is to find out if ocean aging has the potential to change that, he said.

"We'll pull it out in late May and see what the effect of the water temperature, the water pressure and, more interesting to me, the swaying motion of the water does to the wine," he said.

Michael Kaiser, the director of communications for WineAmerica, the National Association of American Wineries, said he had not heard of aging wine in water.

"It's correct it does change the makeup of the wine. When you store wine it's not supposed to be stored underwater and especially in salinized water," he said. "But it's interesting that someone would experiment with it to see what it's like."

He also suggested that wine recovered from sunken ships may simply taste better because the wine is really old, although the water may affect it as well.

The wine that was sunken on Wednesday has additional wax seals and the cages are made of marine steel to withstand the ocean environment. The mesh allows the water to move around the bottles.

Dyke called the experiment "a beginning for us. It's the beginning of a testing process to see if we can do this in larger quantities for a longer period of time." The winery was founded last year.

Once the wine is pulled from the ocean it will be chemically compared to the wine aged in a wine cellar. It will also be tasted and compared by wine experts, Dyke said.

Charleston Harbor was selected for the experiment because Dyke is from Charleston and because the city is increasingly known for its fine dining.

"With our southern roots in Charleston and Charleston being an historic location what better place to do this?" Dyke asked.