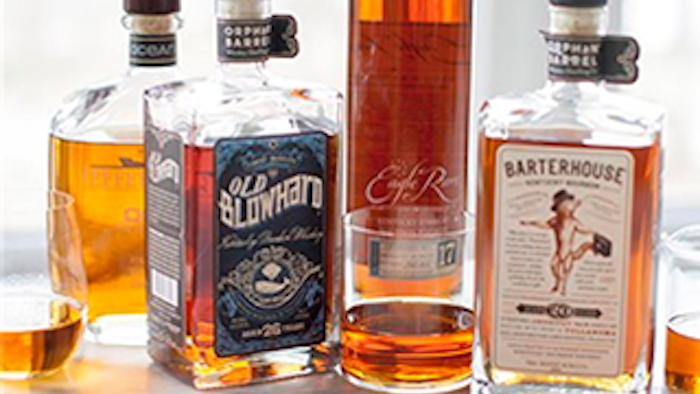 (AP) — Hoping to get your hands on a bottle of Pappy Van Winkle 23-year-old bourbon? Hope on. The wildly popular ultra-premium bourbon is legendarily difficult to find and when it is spotted — there's even a Pappy Tracker app for that — it's quickly sold out.

And Pappy isn't the only super-sought-after spirit. Other elusive bourbon brands include the 17-year-old iteration of Eagle Rare, William Larue Weller, Stagg Jr. and Angel's Envy Cask Strength, all part of a bourbon renaissance that has seen a new appreciation of American whiskey, as well as the birth of a whole new class of cult spirits.

"It seems like that quality and variety and hand-crafted story is finally starting to be appreciated," says Kris Comstock, bourbon marketing director for the Buffalo Trace Distillery, which sells the Stagg and Weller brands. Buffalo Trace also produces Pappy Van Winkle in association with the Van Winkle family.

Jess Novak, Drink Editor at food and drink website The Daily Meal, credits the rise of cult bourbons to the overall trend of eating and drinking better, along with the nostalgia-driven interest in creating hand-crafted products.

"Bourbon really feels like it hails from our grandfather's or great-grandfather's era. It's something you have to learn how to drink and it's deeply American," she says. "It's the kind of thing you drink when you're making your own footstool. So, there's these small-batch, cult bourbons. They're crafted, they have this focus and warmth that comes through in the taste."

And producers are looking for new ways to impart that hand-crafted flourish. Hard-to-find Jefferson's Ocean, for instance, was aged in barrels at sea. "The bourbon takes on many interesting flavors on its voyage that it could never pick up by maturing the way other premium bourbons do," says Jefferson's founder Trey Zoeller.

Bourbon as a whole has become a big player on the liquor scene in recent years, but part of the special appeal of cult bourbons — on top of their craft quality, of course — is their exclusivity. Cult bourbons aren't made in huge quantities, so some of the pleasure is in the hunt. Not surprisingly, that hunt comes at a cost; these bourbons often run two, three or many times more the price of more common bottles.

When it comes to the hunt for Pappy Van Winkle, it may surprise you to know who is among the people unhappy about the long lines and wait lists: Julian Van Winkle III.

"We hate to disappoint people," he says simply.

Van Winkle, whose family has been generations in the bourbon business, points out that today's 23-year-old batch was based on demand levels of the late '90s. The company is making more now, though they won't say how much more.

Orphan barrels are just what they sound like, barrels scattered in various warehouses that were intended to go into a particular blend but for one reason or another didn't. The oldest barrel, Old Blowhard, is 26 years old. The Orphan Barrel project is not limited to bourbon; a team also is scouting warehouses in Scotland and Ireland for likely candidates.

"We've found some amazing whiskey out there and more to come, as well," says Ewan Morgan, Diageo's Master of Whiskey in charge of the Orphan Barrel program.

In case you need a refresher, whiskey, generally spelled whisky in Scotland and Canada, is a spirit made from a fermented mash of grain. Bourbon is a U.S. whiskey made from at least 51 percent corn and aged at least two years. Malted barley and rye are typically the other grains used in bourbon. Pappy, however, uses wheat, which some feel is what gives it that special flavor.

Want to try a wheated bourbon without the wait? Novak points out that W.L. Weller 12-year-old is a bit easier to find. In terms of bourbon generally, she's a fan of the Angel's Envy regular bourbon, not so hard to get as the Cask Strength.

When you get ahold of that glass of good bourbon it's best enjoyed, says Novak, with nothing more than three drops of water; she uses a dropper for precision. "It opens up the flavor," she says.