Cargill Moves to Group Housing for Sows by End of 2015

Cargill, one of the largest pork producers in the U.S., is continuing its commitment of moving to group housing for its sows that produce hogs for pork. Company owned facilities will be 100 percent group housing by the end of calendar 2015. 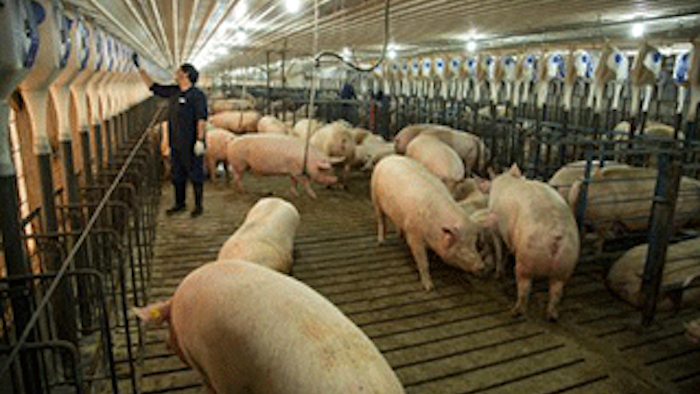 WICHITA, Kan. (PRNewswire) — Cargill, one of the largest pork producers in the U.S., is continuing its commitment of moving to group housing for its sows that produce hogs for pork. Company owned facilities will be 100 percent group housing by the end of calendar 2015. Contract hog farms that contain Cargill-owned sows will transition to 100 percent group housing by the end of calendar 2017. The hogs produced by Cargill-owned sows represent approximately 30 percent of the total hogs harvested annually at the company's two pork processing facilities in Illinois and Iowa.

Cargill's U.S. pork operation has maintained 50 percent group housing for company owned sows over the past several years. The company's 2011 acquisition of an idled hog farm complex in the Texas Panhandle is allowing Cargill to achieve 100 percent group housing for its gestating sows. Over the past three years, Cargill has invested more than $60 million in the purchase and improvement of the 22,000-acre property near Dalhart, Texas, including the construction of sow barns containing group housing and conversion of existing sow housing from the type known as stalls/crates. Cargill's Dalhart facility employs more than 300 people, including a team trained to care for the animals at the site.

"Over the past two years, many of our retail, foodservice and food processing customers have made decisions about future sourcing of pork products from suppliers that use group housing for gestating sows," stated Mike Luker, president of Wichita-based Cargill Pork. "While Cargill was a pioneer in the use of group housing for gestating sows dating back more than a decade, in the past few years growing public interest in the welfare related to animals raised for food has been expressed to our customers and the pork industry.

"Both group housing and individual housing have pros and cons, and we continue to learn, and evolve best practices from our transition to group housing," explained Luker. "While an industry change of this magnitude is challenging and costly, we believe it is the right thing to do for the long term future of pork production in the U.S., and our customers agree with us and support our decision. Nevertheless, we need to be mindful that many family farms involved with raising hogs have their life savings invested in their operations and it will require time and other resources if they choose to make a conversion to group housing."

Based upon the timetable Cargill has set up for completing the transition to group housing for gestating sows, the company will be prepared to support "early adopter" customers seeking pork products from alternative sow housing in the next few years. Cargill's pork business maintains a commitment to the highest standards of animal handling and welfare, and continuously explores technologies that allow it to enhance its efforts in this important area of animal agriculture to help feed a hungry world.

About Cargill
Cargill provides food, agriculture, financial and industrial products and services to the world. Together with farmers, customers, governments and communities, we help people thrive by applying our insights and nearly 150 years of experience. We have 143,000 employees in 67 countries who are committed to feeding the world in a responsible way, reducing environmental impact and improving the communities where we live and work. For more information, visit Cargill.com and our News Center.