Philippine de Rothschild, who cracked a male-dominated wine industry to become company chairwoman and was known by many as simply "The Baroness," has died. She was 80. De Rothschild was a grande dame of Bordeaux wine who halted an acting career to run vineyards. 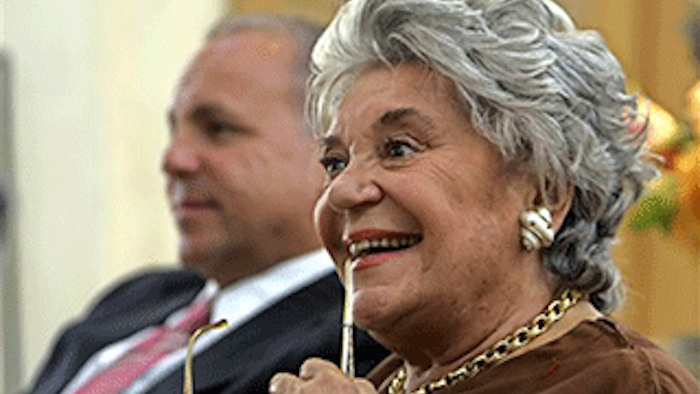 PARIS (AP) — Philippine de Rothschild, an energetic and self-certain grande dame of Bordeaux wine who halted an acting career to run vineyards owned by the family dynasty, has died, her company said Sunday. She was 80.

She died Friday in a Paris "from the effects of a serious operation", winemaker Baron Philippe de Rothschild SA said in a statement, without specifying further.

De Rothschild, who cracked a male-dominated wine industry to become company chairwoman and was known by many as simply "The Baroness," understood the ups and downs of bearing one of Europe's best-known family names: As a girl in Nazi-occupied France, she used her mother's maiden name; as a professional actress, she took a stage name.

In a 1999 interview with French newspaper Liberation, she said: "When your name is Rothschild, everyone thinks you had an easy childhood."

Hers — during World War II — was not. Her father, a scion of the fabulously wealthy Jewish banking family, fled to England to join Gen. Charles de Gaulle's expatriate administration. She stayed behind with her mother Elisabeth, who believed that her Catholic religion would spare her deportation.

But in 1944, just two months before the Allies liberated Paris, the Nazis deported her mother to Ravensbrueck, Germany, where she died the next year. De Rothschild, in her comments to Liberation, recalled that she herself was spared deportation only because one German officer thought of his own daughter, who was about the same age, when he saw her. After the war, de Rothschild spent decades at the Comedie Francaise and elsewhere in the theater circuit, using the stage name Philippine Pascal.

When her father, Baron Philippe de Rothschild, died in 1988, she took control at the family business, Chateau Mouton Rothschild, later renaming it after him.

While the Rothschild dynasty made its name first in finance, the family's London branch ran the Chateau Mouton-Rothschild winery in France for five generations. De Rothschild expressed pride to be the first woman to run it.

Her father notably added innovation to an often staid industry by adorning drawings of artists like Picasso or Dali onto wine bottle labels. She continued the tradition: British artist Lucian Freud was commissioned to create the label for the 2006 edition of Chateau Mouton Rothschild — a wine that has been known to fetch thousands of dollars per bottle over the years.

In business, she used an actor's engaging demeanor. With a raspy voice, she was unafraid to speak her mind and was equally at ease in English and French. She had a penchant for thick earrings and heavy necklaces.

Mouton Cadet, one of the company's wines, is recognized well beyond the rarefied world of connoisseurs. She maintained Baron Philippe de Rothschild's Opus One venture with Robert Mondavi, an alliance of New World vigor and Old World knowhow.

"If I had the choice, I would have likened Philippine de Rothschild to Champagne. She flames up, she's joyous, she's frothy," wrote Paris Match reporter Philippe Tesson in a 2007 profile. "Destiny decided otherwise ... That's how Philippine became a Bordeaux."

Twice married, she is survived by two sons, a daughter and grandchildren. A funeral is planned Sept. 1 in southwestern Pauillac, said company CEO Hugues Lechanoine.