As many as 3,000 people are expected to visit the factory that makes Sriracha hot sauce over the weekend in the Los Angeles' suburb of Irwindale. During a 20-minute walk through the 650,000-square-foot facility, visitors can watch chili grinding at Huy Fong Foods. 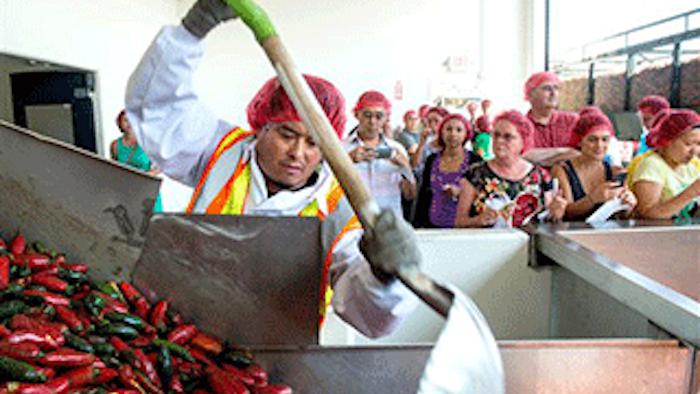 IRWINDALE, Calif. (AP) — A Southern California hot sauce plant that came under fire for its spicy odors is throwing open its doors to the public, offering a whiff of excitement and perhaps a breath of fresh air in its relations with its neighbors.

As many as 3,000 people are expected to visit the factory that makes Sriracha hot sauce over the weekend in this eastern Los Angeles suburb. The factory is holding its first open houses to kick off the chili harvest season.

Tran gave an explanation for opening the factory doors when he previously had been secretive about its trade secrets and customized machinery.

Irwindale, the Los Angeles suburb of about 1,500 people, had sued the company and declared the plant a public nuisance after some nearby residents complained of an eye-watering, throat-closing odor during grinding season.

Tran began offering small tours to visitors from all over the U.S. and Canada, and several politicians said they wouldn't mind if he moved his $60 million company to their areas.

But in May, an agreement was forged between the city and Tran with the help of representatives from Gov. Jerry Brown's Business and Economic Development Office. The city dropped its nuisance declaration and lawsuit.

Tran, an immigrant from Vietnam whose company produces several chili sauces based on the flavors of his native country, said he installed stronger ventilation filters he was confident would block the smell.

Tran told the Star-News that he has received only two complaints since truckloads of chilies began arriving at the factory at the end of July and that inspectors didn't detect any odors.

The factory offered tours Friday and intends to continue them every Saturday, except the Labor Day weekend, until the harvest season ends in November.

The plant gets 45 truckloads of chili peppers daily from farms in Kern and Ventura counties, with a harvest season goal of 58,000 tons. The peppers are ground and mixed with vinegar and salt, releasing a spicy scent that made some visitors sneeze or cough.

"The smell doesn't even bother us, and I live three blocks away," said Lopez, 53. "I haven't even coughed once since I've been in here."