Town Creates 80 Percent of All Canned Pumpkin Consumed in US

The small central Illinois town of Morton has its hands at a seemingly endless line of pumpkins — millions of them — that'll become countless pies and loaves of sweet, fresh-baked pumpkin bread. 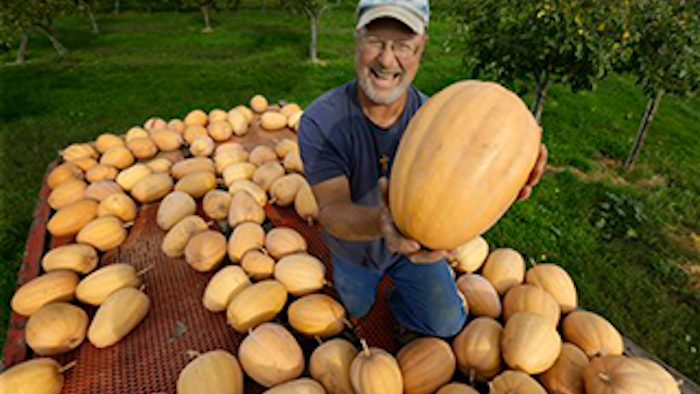 "I try to make it every day, and I'm usually pretty good at it" — it being what he calls quality control.

Beuttel is the operations manager for the Libby's pumpkin cannery that's at the epicenter of the canned-pumpkin world: the small central Illinois town of Morton.

For 13 or so weeks, a seemingly endless line of big rigs delivers pumpkins — millions of them — that'll become countless pies and loaves of sweet, fresh-baked pumpkin bread. Somewhere between 80 and 85 percent of all the canned pumpkin consumed in the United States comes from this cannery, owned by parent company Nestle USA.

That gives Morton a pretty good claim to the title it embraces, Pumpkin Capital of the World. And in a good year with a cool Midwestern summer like this one, Libby's has the cannery running day and night.

No place else grows the pumpkins the cannery needs, so a bad year in Morton's pumpkin fields can mean pumpkin panic. That happened in 2009, when wet weather meant a small crop as many pumpkins were left to rot in deep, muddy fields.

"About 10 days before Thanksgiving that year, we put out an alert," Nestle spokeswoman Roz O'Hearn said. "'You better buy it when you see it because we've had to suspend the harvest.' ... We had reports that people were going into their local supermarkets and, where they would see it, people would like sweep the shelf (of cans)."

Pumpkins aren't quite everything in Morton, but they mean a lot to the former farming town — providing an annual festival, about 150 seasonal cannery jobs and another 50 or so year-round in this town of 16,000. Pumpkins give Morton an identity beyond being a bedroom community for nearby Peoria, said John Ackerman. He grows 30 acres of pumpkins for Nestle and another 30 to sell from his farm.

"We're the people that have pumpkin pancakes at our Pumpkin Festival," he said. "It's fun. We understand just how much Midwest Americana that is. We enjoy it."

Other than the arrival of Interstate 74 in the 1960s, no other event quite defines Morton as much as the beginning of pumpkin canning in the 1950s, according to Mary Lynn, curator of the history room at the Morton Public Library.

The freeway connected Morton to Peoria, where many residents now work. And the cannery, formerly used for a range of canned vegetables, helped claim the pumpkin-capital title, something that had been pinned on another small town about 16 miles away, Eureka.

Several thousand acres around Morton are now planted every year with pumpkin seed provided by Nestle.

The company checks the land of contract farmers — more than 200 in some years — for production potential. Beuttell won't say exactly what the company looks for, but in general, "Good pumpkin soil drains well, has a good nitrogen content, (and) has a little bit of sand in it, actually."

"They have to test their soils to a high degree," the farmer said, adding that his squashes are regularly tasted.

The pumpkins Nestle wants aren't the pretty varieties prized for carving. They're Dickinsons: beige, oblong, thin-skinned and grown lying on their sides. What matters is what's inside, a thick layer of rich, bright-orange meat, Beuttell said.

When the plant is canning, there are two dominant smells: pungent pure pumpkin, not too different from any steamed vegetable, Beuttel said, and the pie and pumpkin bread mixes, laced with nutmeg and cinnamon.

"It fills the air, most definitely," he said.