High above downtown Hong Kong's bustling, traffic-clogged streets, a group of office workers was toiling away not on a corporate acquisition or a public share offering but on harvesting a bumper crop of lettuce atop one of the skyscrapers studding the city's skyline. It's rooftop farming taken to the extreme, and more about reaping happiness than providing food. 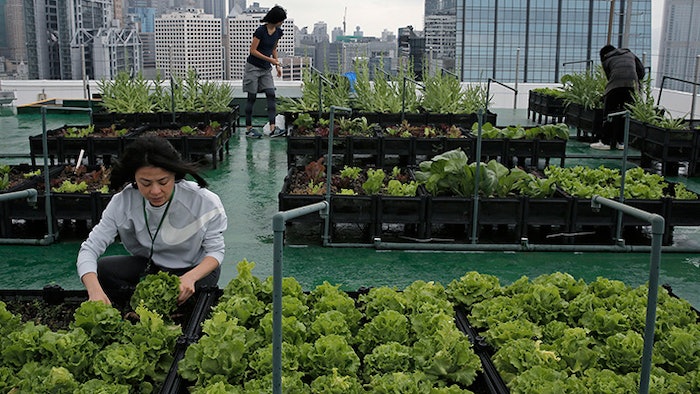 In this Nov. 14, 2017, photo, volunteers pick lettuce growing in rows of low black plastic planters on a decommissioned helipad on the roof of the 38-story Bank of America tower, in Hong Kong. High above downtown Hong Kong's bustling, traffic-clogged streets, a group of office workers toil away. They're working not on a corporate acquisition or a public share offering but on harvesting a bumper crop of lettuce atop one of the skyscrapers studding the city's skyline. (AP Photo/Kin Cheung)

HONG KONG (AP) — High above downtown Hong Kong's bustling, traffic-clogged streets, a group of office workers was toiling away not on a corporate acquisition or a public share offering but on harvesting a bumper crop of lettuce atop one of the skyscrapers studding the city's skyline.

It's rooftop farming taken to the extreme, and more about reaping happiness than providing food.

The volunteers were picking butter lettuce, Indian lettuce and Chinese mustard leaf in rows of low black plastic planters on a decommissioned helipad on the 146-meter (480-foot)-high roof of the 38-story Bank of America tower, the scenery: a vertiginous panorama of glass office towers framed by lush mountain peaks and Victoria Harbor.

"It's pretty dirty but still I really enjoy it," said Catherine Ng, one of five volunteers who work for the property company managing the tower.

The farm is run by Rooftop Republic, a three-year-old startup whose founders are tapping growing interest in organic food and taking advantage of unused roof space in the cramped, high-rent Chinese city.

Hong Kong, with its skinny office blocks and apartment towers and busy, affluent residents, might seem an unlikely place for rooftop farming to catch on. The finance and trading hub has rural suburbs, but farming only takes up 700 hectares (1,730 acres) of its land and agriculture accounts for 0.1 percent of its economic output. Rooftop Republic's founders say the appetite for their services is growing among Hong Kongers who are seeking a more sustainable lifestyle and concerned about where their food comes from.

"We have been getting more and more interest from people who want to grow their own food," said Michelle Hong, one of the founders. "A lot of it is triggered by concerns about food safety and the realization that a lot of the food they consume might be laden with pesticides. I think people want to have more control and also more trust."

Hong Kong imports almost all of its food, much of it from mainland China. Public awareness about food safety in the former British colony has risen after countless food contamination scandals on the mainland.

Rooftop Republic has set up on average one farm a month since its founding and now manages 36 covering more than 30,000 square feet (about 2,800 square meters), including one in mainland China, Hong said. It also provides workshops for companies, building owners, schools, and community groups.

The Bank of America farm was a milestone because it was the first in the city's financial district. The company has since set up two more in the area and is looking at a few more sites, Hong said. Vegetables from the tower are donated to a food bank for uses in lunch boxes distributed to the needy. Some of its other farms are at hotels or restaurants, which use the herbs, eggplants and melons for dishes on their menus.

Plenty of other groups or individuals have started cultivating their own rooftop vegetable gardens, said Matthew Pryor, a Hong Kong University architecture professor who has counted at least 60 and thinks there are a lot more he doesn't know about.

Pryor's research found approximately 1,500 rooftop farmers in the city, cultivating a total area of about 1 ½ hectares. He thinks there's potential for that to easily grow to 50,000 people working on a suitable rooftop area of 600 hectares.

Pryor said he discovered through his research that their main product isn't edible.

"The rooftop farms here produce virtually nothing" compared to Hong Kong's overall consumption, Pryor said. "What they do produce, however, is happiness, and this social capital that they generate is enormous."

The farms can help stressed-out, overworked and socially isolated Hong Kongers be happier and improve their well-being by letting them hang out with their friends and commune with nature.

Those benefits were on display at another Rooftop Republic farm at airline Cathay Pacific's headquarters near the city's airport on rural Lantau Island.