Greenpeace is withdrawing from the main global group for certifying sustainable wood. 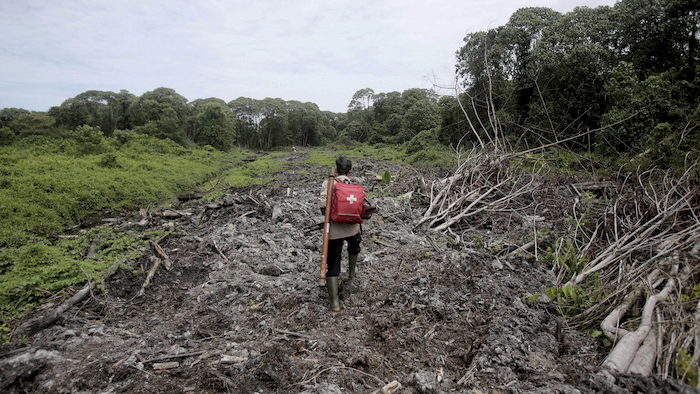 In this Thursday, Aug. 10, 2017, file photo, a conservationist carries a medical pack and tranquilizer rifle during a rescue operation for orangutans trapped at a swath of damaged forest near a palm oil plantation in Tripa, Aceh province, Indonesia. Image credit: AP Photo/Binsar Bakkara, File

Greenpeace is withdrawing from the main global group for certifying sustainable wood, saying the organization it helped found more than two decades ago is failing to protect natural forests from exploitation.

Greenpeace said the Forest Stewardship Council inconsistently implements its standards and "fell short" of its goals of conserving forests and benefiting society.

The FSC mark, a stylized tree, is sought by paper producers and other wood users as an endorsement they can use in the marketplace to promote their products as sustainable and charge a premium.

The council had successes in some regions, the environmental group said, but was failing in "high risk regions where democratic and civil society institutions are weak and corruption is high."

Greenpeace International's statement, posted on its website, said that the council has become a "tool for forestry and timber extraction" and it wouldn't renew its membership. It said national branches of Greenpeace that belong to it will make their own decisions about continuing to work with the council.

In an emailed statement, FSC on Tuesday denied that it allows deforestation and said that few organizations can match its transparency.

"It is a fact that FSC is a tool for responsible forest management, which includes forestry and harvesting. This is the core mandate of the organization, but FSC is also a safeguard against widespread illegal logging, deforestation and ultimately, forest degradation," it said.

In Indonesia, which is cutting down its rainforests faster than any other country, the FSC has given certifications to Korindo, a Korean-Indonesian joint venture that has been clearing rainforests in Papua for logging and palm oil plantations. The council says it has been investigating Korindo after accepting a complaint from an environmental group, Mighty Earth, in October.

In 2007, the FSC withdrew its certification of Asia Pulp & Paper, the global paper products arm of the family-owned Sinarmas conglomerate that was notorious for deforestation and land grabs in Indonesia.

However for the past decade it continued to certify diary and notebook company Nippecraft and its Collins Debden brand, which is owned by the Sinarmas family through APP. The council is now reviewing those specific certifications.

Greenpeace said a major deficiency in FSC's systems was lack of transparency such as a failure to publish digital maps that locate the commercial forests certified by the council.

Bonn-based FSC said it is developing digital tools to increase the credibility of its certifications.

The non-profit organization is divided into voting chambers representing social, business and environmental members. It was founded in 1994 and says it has certified more than 190 million hectares of forest in over 80 countries.

A website, FSC-watch.com, is dedicated to pointing out what detractors consider to be flawed FSC outcomes such as a 2017 decision by the council's general assembly to scrap a ban on certifying forestry plantations that were established on natural forests cleared after 1994.