Fishing boats used high-tech systems to find vast schools of fish for decades, depleting stocks of some species and leading to the complete collapse of others. Now more than a dozen apps, devices and monitoring systems aimed at tracking unscrupulous vessels and the seafood they catch are being rolled out — high-tech solutions some say could also help prevent labor abuse at sea. 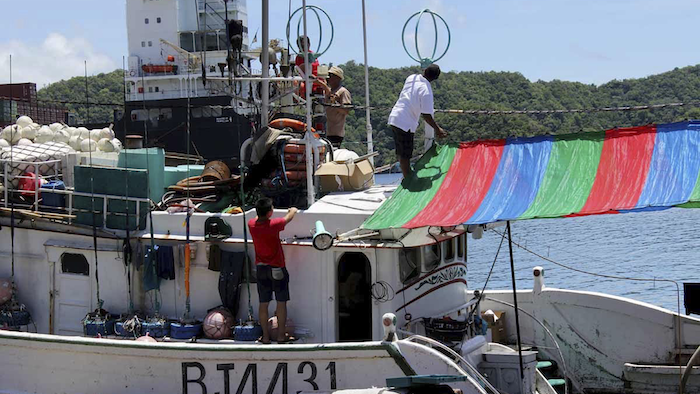 BANGKOK (AP) — Fishing boats used high-tech systems to find vast schools of fish for decades, depleting stocks of some species and leading to the complete collapse of others. Now more than a dozen apps, devices and monitoring systems aimed at tracking unscrupulous vessels and the seafood they catch are being rolled out — high-tech solutions some say could also help prevent labor abuse at sea.

Illegal fishing, which includes catching undersized fish, exceeding quotas and casting nets in protected areas, leads to an estimated $23 billion in annual losses, according to the United Nations. Meanwhile, overfishing close to shore has pushed boats farther out, where there are few laws and even less enforcement to protect workers from abuse. Slavery has been documented in the fishing sectors of more than 50 countries, according to U.S. State Department reports.

Earlier this year, U.S. Secretary of State John Kerry said using technology at sea could eventually mean "there is not one square mile of ocean where we cannot prosecute and hold people accountable..."

"Technology is all about knowing where the fishing boats are on the ocean, but that does precious little for crews being physically abused and worked to the bone on those vessels," he said.

Here are some emerging tech solutions:

Nonprofit anti-trafficking organization Project Issara is tapping into near-ubiquitous smartphones with an app that allows Burmese and Cambodian migrant workers around the world to share information about their working conditions. Their reviews reach nonprofits, governments and businesses which can monitor and learn from the feedback. Combined with a new multilingual hotline, victims of labor abuses have a safer, discreet way of seeking help.

A worker runs a gadget over a fish just after it's pulled from the boat, giving it a bar code that creates a permanent record of where it was caught. It's a simple swipe with profound potential. Thomas Kraft at Norpac Fisheries Export established one of the industry's first bar-code systems that give each fish a tag that can provide details about location, boat, species, and weight. He's been using the technology in locations worldwide and says it could easily be expanded to include crews on individual boats to help fight against labor abuse.

EYES ON THE SEAS

Eyes on the Seas uses satellite trackers, radar signals, drone images, even radio signals to create a dynamic world map. Analysts using algorithms and observations can identify boats that appear to be illegally fishing in protected areas or pulling near each other to offload illicitly caught seafood. They can then contact national authorities with detailed evidence about where a boat is and what it appears to be doing. Eyes on the Seas can spot boats even if they turn off their basic safety satellite trackers, which may be a deterrent for would-be bad actors, but confidential data used in the system means it cannot be publicly available. Built by the Pew Charitable Trusts and a U.K. government satellite start-up initiative, the system is still being fine-tuned.

Like Eyes on the Seas, this tool provides a nearly-live view of fishing boats at sea around the world. But the data it uses to identify boats comes almost exclusively from Automatic Identification Systems, satellite trackers used in large vessels that are easily switched on and off. Rolled out earlier this year, Global Fishing Watch is on the web and open to the public in beta form, with tracks for 35,000 fishing boats going back more than four years. Oceana, SkyTruth and Google partnered to build the site, with support from Leonardo DiCaprio Foundation.

Cameras are recording everything that comes over the rail and onto the deck of a few dozen tuna boats loaded with motion sensors and GPS systems in the western Pacific Ocean. The goal of The Nature Conservancy's project is to get the recording systems on thousands of tuna boats in the Palau longline fleet. The challenge is reviewing the video: about 800 hours of footage from each two-month fishing trip. This month the nonprofit environmental group is launching a $150,000 prize for machine-learning software that can spot turtles, shark finning and undersized tuna being illegally reeled in.