Laborers were building a circular cooling tower in the southern province of Jiangxi when the interior scaffolding collapsed. 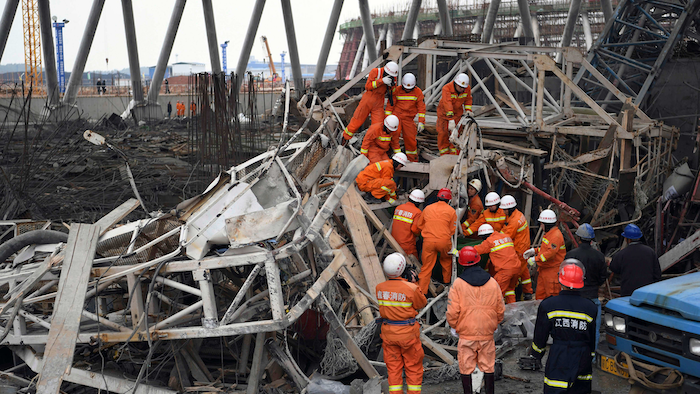 Nine executives are being held responsible by the Chinese government for a power plant accident where 74 workers were killed when an under-construction cooling tower collapsed, state media reported Monday.

Those under detention included the board chairman of engineering firm Hebei Yineng, a major builder of power plants that has a record of workplace deaths, state media reported. The chief manager, deputy manager and director of engineering for the project were also detained. 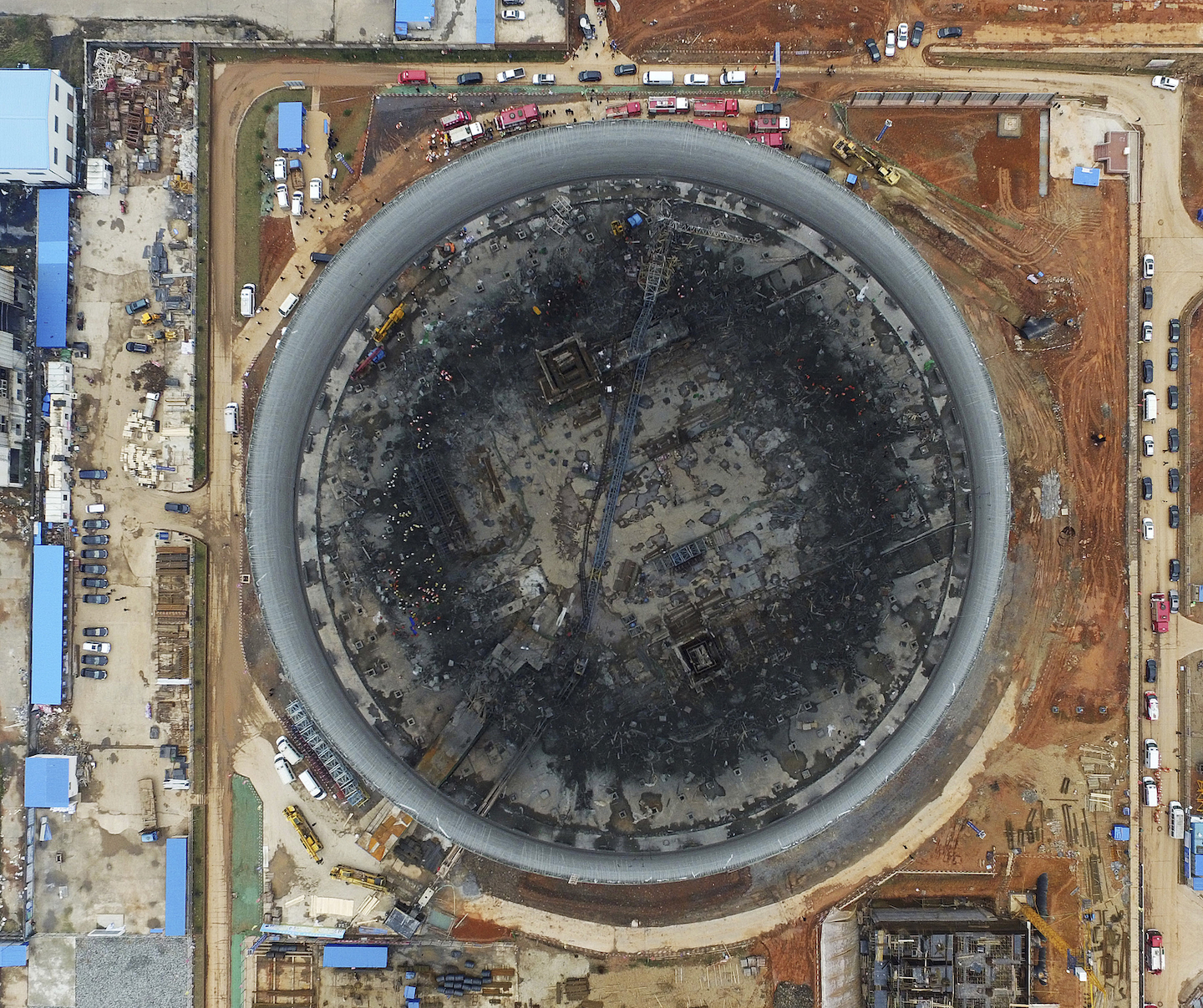 In this aerial photo taken Thursday, Nov. 24, 2016 and released by Xinhua News Agency, rescue workers look for survivors after a scaffolding collapsed during a construction of a circular cooling tower for the Fengcheng power plant in Yichun city in eastern China's Jiangxi Province. (Wan Xiang/Xinhua via AP)

Laborers were building a circular cooling tower in the southern province of Jiangxi when the interior scaffolding collapsed last Wednesday, releasing a cascade of steel, concrete and wooden planks. It was one of China's deadliest workplace accidents in recent years and prompted calls from government officials for stepped-up inspections and a renewed emphasis on worker safety.

No formal charges were announced against the detained executives, who also included safety managers and supervisors from a Shanghai consulting firm. But China typically responds to high-profile workplace deaths by arresting and prosecuting company executives and local officials, with their confessions often broadcast on state television, as part of a longstanding effort to convince the public that the government is fighting widespread corruption and poor enforcement of safety standards. 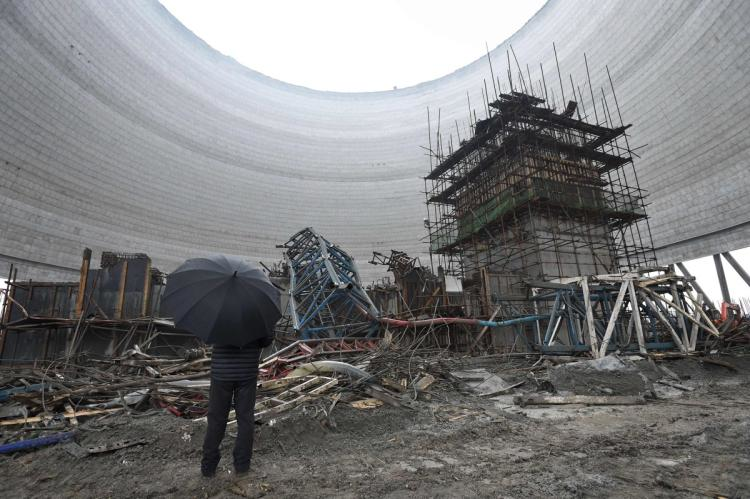 A man holding an umbrella looks at the collapsed construction site of a cooling tower for a coal-fired power plant in Fengcheng in central China's Jiangxi province. (Chinatopix via AP)

After last year's explosion at a warehouse in Tianjin that killed 165 people, a court handed down sentences to 49 people, including a suspended death sentence earlier this month for the head of a company implicated in the blast.

And a 2014 explosion at an auto parts factory in the eastern city of Kunshan that killed 146 people was followed by prison terms for 14 people, including the owner and top managers of the factory, local firefighters, and work safety officials.

Investigators previously announced the detentions of 13 people after Wednesday's accident. It wasn't immediately clear if the suspects identified Monday were included in that total. 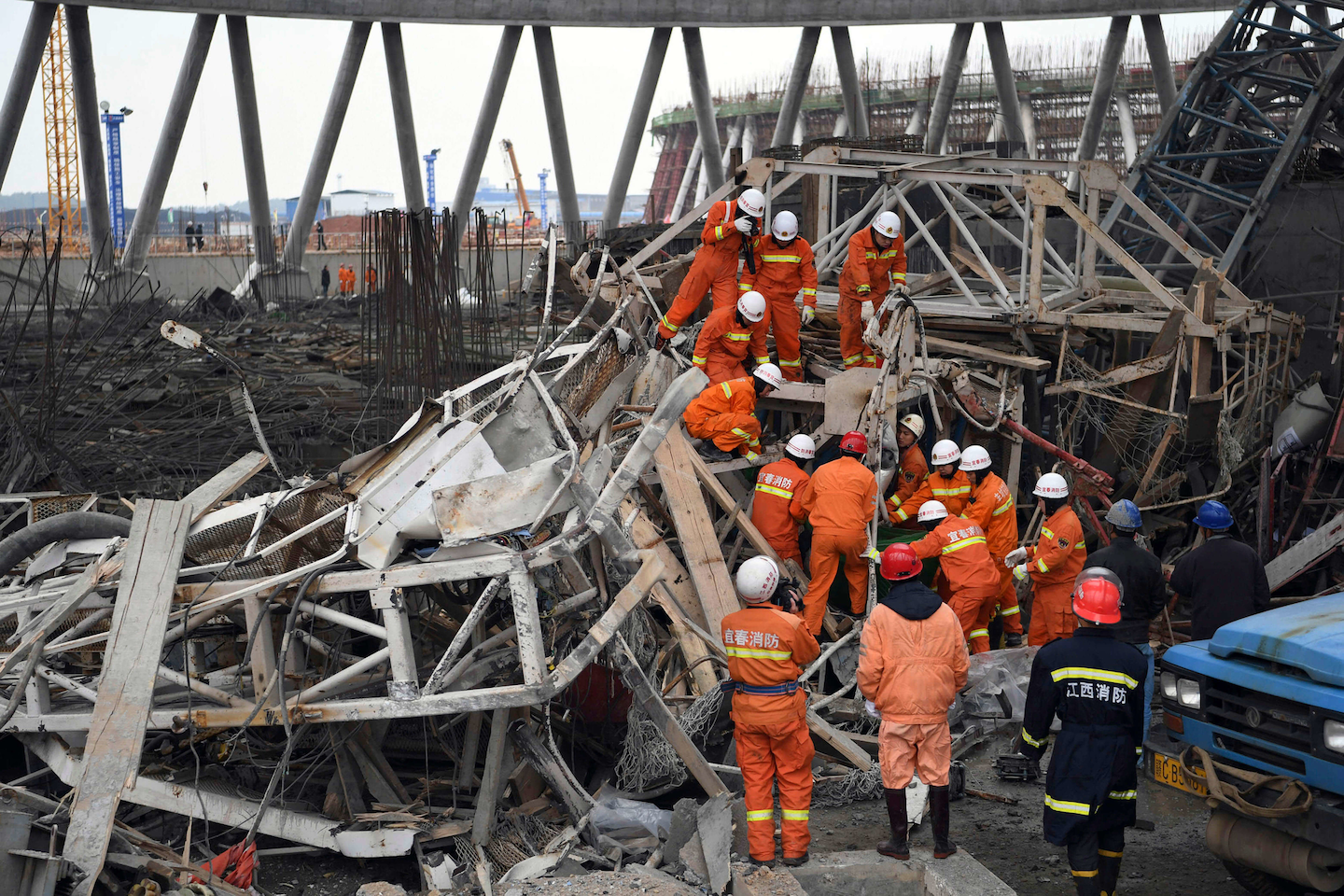 Workers had been toiling in three shifts to try to finish the project ahead of the arrival of winter, according to local media interviews with surviving employees. The project had been designated a priority project by the province, likely adding to the pressure to complete it.

A person who answered the phone at Hebei Yineng said he wasn't aware of the situation, and declined to comment further or give his name.