The possible decline of the 12-nation TPP could give a boost to alternative initiatives. 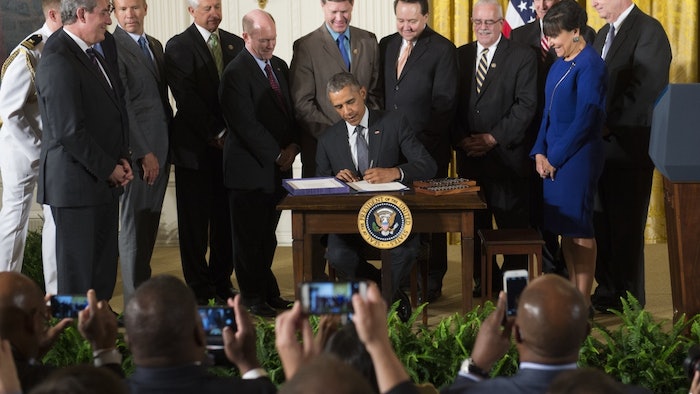 President-elect Donald Trump says he wants to pull out of the Trans-Pacific Partnership but other Pacific Rim leaders are vowing to push market-opening efforts they say are vital for growth.

The possible decline of the 12-nation TPP could give a boost to alternative initiatives including one promoted by China in which the United States is not taking part.

Trump's message, in a brief video, was issued after President Barack Obama and other leaders of the Asia-Pacific Economic Cooperation group, meeting in Peru, called Sunday for fighting the backlash against trade highlighted by Trump's victory and Britain's vote to leave the European Union.

Promoters of the TPP say it is a step toward building a wider, pan-Pacific free trade zone, though critics object it would shift too much control over regulation to companies from governments and the public.

"There is very strong support among the other 11 parties to the TPP to ratify it and to seek to bring it into force," said Australian Prime Minister Malcolm Turnbull.

Trump described the 12-nation pact as a "potential disaster for our country." He has also said he wants to renegotiate the North American Free Trade Agreement with Canada and Mexico.

Obama has said he would give up seeking congressional approval for the TPP. He had championed it as a way for the United States to lead the creation of "gold standard" rules for 21st century trade.

"I think not moving forward would undermine our position across the region," Obama told reporters in Lima.

New Zealand Prime Minister John Key said Washington will need to think about what role it wants to play in Asia and its fast-growing markets.

"The United States isn't an island. It can't just sit there and say it's not going to trade with the rest of the world," said Key after returning home. "At some point they're going to have to give some consideration to that. But naturally, we're a bit disappointed."

The TPP, signed this year in New Zealand, would take effect after it is ratified by six countries that account for 85 percent of the combined gross domestic product of its member nations.

The United States is 60 percent of the combined GDP of that group and Japan less than 20 percent, so those conditions cannot be met without U.S. participation.

As Japan's most powerful leader in a decade, Abe invested political capital in overcoming opposition to the TPP from farmers and the medical lobby. His ruling Liberal Democratic Party pushed TPP ratification through the lower house of parliament and had been set to seek final approval in the upper house.

Renegotiating the agreement would "disturb the fundamental balance of benefits," said Abe, who was in Argentina following APEC.

China hopes for progress on the Regional Comprehensive Economic Partnership, or RCEP, it is promoting with the 10 governments of the Association of Southeast Asian Nations, a Chinese foreign ministry spokesman said.

The RCEP would require fewer market-opening concessions than TPP. Critics say that would let China shield its huge but inefficient state-owned companies from competition. The agreement would include China, India, Indonesia and South Korea but no countries from the Americas have joined.

"We would like to push the negotiation process to make headway at an early date," said the spokesman, Geng Shuang, at a regular briefing.

China also called at APEC for progress on a separate arrangement, the Free Trade Agreement of the Asia Pacific.

"We hope these free trade agreements can reinforce rather than thwart each other," said Geng. "We should prevent fragmentation of economic and trade arrangements or politicizing such agreements."