A North Dakota man faces four decades in prison after pleading guilty to having a hit man kill two of his business associates — one who was bludgeoned to death at a truck shop and another who was shot at his upscale home while his wife hid in a closet. 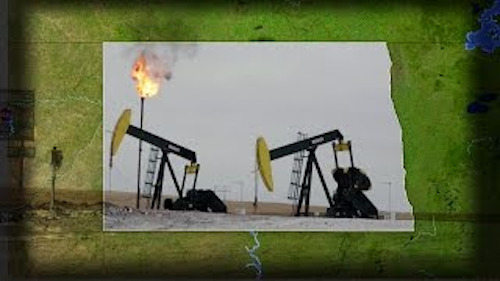 SPOKANE, Wash. (AP) — A North Dakota man faces four decades in prison after pleading guilty to having a hit man kill two of his business associates — one who was bludgeoned to death at a truck shop and another who was shot at his upscale home while his wife hid in a closet.

James Henrikson, 36, admitted Friday in federal court in Spokane that he ordered the deaths of Kristopher Clarke and Doug Carlile, associates tied to North Dakota's oil-field business. Henrikson said he employed Timothy Suckow as the hit man both times.

Federal prosecutors will seek a 40-year prison term when Henrikson is sentenced Dec. 18, The Spokesman-Review reported.

Henrikson acknowledged in court that Clarke was killed in February 2012, bludgeoned to death by Suckow in Henrikson's North Dakota truck shop.

U.S. Attorney Mike Ormsby said after the hearing that Henrikson could receive a lesser sentence if he assisted in locating Clarke's body, thought to be buried on state park land near Watford City, North Dakota.

Helping to find Clarke's body was not part of the plea deal, Ormsby said.

Other conspirators in the deaths have received sentences between eight years and 30 years, including Todd Bates, who pleaded guilty to charges earlier Friday in exchange for a prison sentence of eight years and four months.

Jill Williams, Clarke's mother, said she was shocked by the deal.

"It's not justice," Williams said. "He caused the death of two people. Forty years is not anywhere near enough."

Bates pleaded guilty to buying heroin in Chicago for Henrikson and soliciting a would-be hit man nicknamed "The Wiz" to kill another man for $25,000 at Henrikson's direction. That killing was never carried out.

The pleas of Bates and Henrikson end an investigation that began after Carlile was shot and killed while his wife hid in an upstairs bedroom closet Dec. 15, 2013. Spokane detectives called Henrikson that night and questioned him, based on statements by Carlile's sons that Carlile feared his business partner might turn violent.

Assistant U.S. Attorney Aine Ahmed told Mendoza during the hearing that the investigation revealed no evidence that Carlile had taken money from Henrikson.

Investigators pieced together a web that showed Delao had been contacting Suckow and Bates about contract killings and assaults on the Fort Berthold Indian Reservation in North Dakota and elsewhere. They included offers of money to kill Tex Hall, the former chairman of the Mandan, Hidatsa and Arikara Nations.

Henrikson's ex-wife, Sarah Creveling, was indicted on federal fraud charges in North Dakota related to her business dealings with Henrikson.