A key government witness testified Thursday that his former coal boss thought it was less expensive to pay safety violation fines than take proper precautions, and his company even gave the witness a higher paying job after the deadliest explosion in four decades happened at his mine. 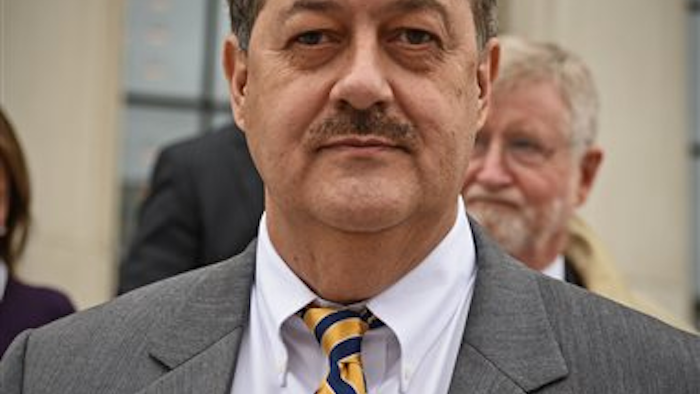 CHARLESTON, W.Va. (AP) — A key government witness testified Thursday that his former coal boss thought it was less expensive to pay safety violation fines than take proper precautions, and his company even gave the witness a higher paying job after the deadliest explosion in four decades happened at his mine.

Assistant U.S. Attorney Steven Ruby admitted there was a lot of ground to cover, since Blanchard spent almost five days aiding the defense's arguments that Blankenship and Massey made safety a chief priority. Blanchard also had told the defense that he himself didn't break any laws or conspire with Blankenship to break laws. Prosecutors previously questioned him for a day and a half.

"Mr. Blanchard, we have a lot to talk about," Ruby said to open his questioning, drawing laughs in the courtroom.

Blankenship could face up to 30 years in prison on charges of conspiring to break mine safety laws at Upper Big Branch Mine and lying to financial regulators and investors about company safety. The southern West Virginia mine exploded in 2010, killing 29 men. Blanchard's subsidiary, Performance Coal, oversaw the mine.

Blanchard testified Thursday that as the subsidiary's president, he made $450,000 in 2009 and saw his pay grow to $600,000 in 2010, despite hundreds of safety violations levied against his mine at the time. Even after the April 2010 explosion, his compensation grew when Massey put him in another job, Blanchard said.

Blanchard said there was a setup at Upper Big Branch where miners were warned when federal inspectors arrived on mine property, so the workers could tend to deficiencies before inspectors went underground.

Blanchard previously said a federal inspector told him it was fine to warn miners as soon as inspectors were on mine property. But Ruby said Thursday that a federal court case determined the practice was illegal even in that instance.

"We considered it just to be notice sir, not advance notice," Blanchard said.

Blanchard said he thought Blankenship "knew the general practice, not the particulars" of the warning scheme.

Reminding him that he can't lie on the stand, Ruby made Blanchard reread his November 2014 grand jury testimony several times and assure him that he told the truth. At that time, he simply answered "yes" when asked if Blankenship was aware of the warning system.

Ruby again pointed to grand jury testimony, in which Blanchard gave a different answer about whether the warning system let underground miners clean up safety violations that would have otherwise been caught. In November 2014, Blanchard had answered simply, "It would."

Blanchard's immunity agreement dissolves if he lies. He has told defense attorneys that in 2014 he had been faced with what he called "two bad choices": cooperate with the government, or face prosecution.

On Thursday, the defense wrapped up almost five days of questioning during which Blanchard was asked to testify about roughly 200 memos and other documents.

During questioning by the defense, Blanchard had testified that under Blankenship, Massey pushed for safety; coal miners can sometimes be hard-headed about following instructions; federal inspectors can be subjective in how they levy violations; and regulators forced a ventilation plan on Upper Big Branch that was next to impossible.

Prosecutors will continue to question Blanchard on Friday.