The U.S. government says Volkswagen cheated a second time on emissions tests, programming about 10,000 cars with larger diesel engines to emit fewer pollutants during testing than in real-world driving. 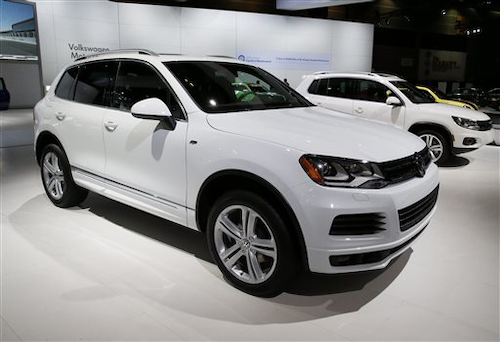 The German automaker installed software designed to defeat the tests on VW, Porsche and Audi vehicles from the 2014 to 2016 model years with six-cylinder diesel engines, according to the Environmental Protection Agency and California Air Resources Board. While on the road the cars give off up to nine times more nitrogen oxide pollution than allowed by EPA standards, the agency said.

The cheating was discovered by EPA and CARB tests performed after VW acknowledged in September that it rigged emissions tests for four-cylinder diesel engines on 11 million cars worldwide, including almost 500,000 in the U.S.

The automaker "knew or should have known that the software ... bypasses, defeats or renders inoperative elements of the vehicle design related to compliance with Clean Air Act Emission standards," the agency said in a violation notice sent to VW Monday.

Volkswagen faces fines of up to $37,500 per vehicle, which means up to $375 million could be added to penalties already projected in the billions of dollars. The company has set aside about 6.7 billion euros ($7.38 billion) to pay for eventually recalling and fixing the affected cars. Analysts expect the impact will likely be several times larger than the amount VW has set aside.

The EPA said Monday that the software on the six-cylinder diesels has a timer that turns on pollution controls when testing begins, including fuel injection timing, exhaust gas recirculation rate and fuel injection pressure. All cause the cars to emit less nitrogen oxide pollution by operating at high exhaust temperatures, the agency says in documents posted Monday. One second after the first phase of the test ends, the cars return to normal operation.

The violations cover models including the 2014 Touareg, 2015 Porsche Cayenne and the 2016 Audi A6 Quattro, A7 Quattro, A8 and Q5. As with the smaller engines, the EPA says the cars are safe to drive.

So far, the agency hasn't ordered any recalls of VW vehicles, which it has the authority to do. VW has said it is working on a fix for the four-cylinder models, which the EPA says can pollute up to 40 times more than emissions limits.

"We need to be sure that the fixes are appropriate and acceptable," EPA Administrator Janet McCabe said.

Last month, the EPA said it was investigating different software on 2016 VW models that have yet to be certified by the EPA to go on sale in the U.S. But officials on Monday wouldn't comment about that investigation, saying that testing is still under way.