At around $45 a barrel, oil prices are about half last fall's level, and jobs continue to disappear. 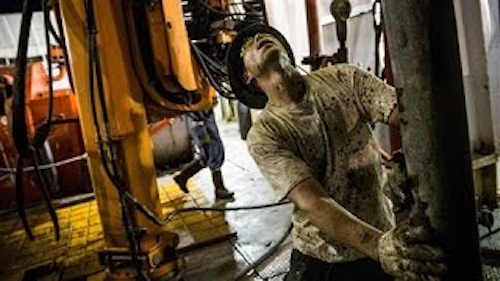 PONCA CITY, Okla. (AP) — It's a slow day at Fun Bob's shaved ice stand, though the temperature is in the 80s. With summer over, only an occasional car pulls up to the blue-and-white-striped shack where David Anderson sits atop a picnic table and explains his plan for replacing the income from the oilfield job he lost this year.

The new entrepreneur is adding coffee, cappuccinos and lattes to his menu. With a bit of luck, he hopes he'll no longer have to endure the boom-and-bust cycles that have been a part of life in this oil town for more than a century.

But nothing is certain, so the 34-year-old ex-Marine is also enrolled in Northern Oklahoma College's process technology program, which prepares students for jobs in the petroleum and power industries.

"A lot of it depends on how this turns out," said Anderson, who bought the business in January after oil prices plummeted and he was laid off. "If this turns into a profitable source of income, where I can run this shack and do coffee and snow cones, I'll stay here."

At around $45 a barrel, oil prices are about half last fall's level, and jobs continue to disappear. But people in the Oklahoma oil patch aren't panicking. Instead, they're following a familiar ritual: returning to jobs or plans they had before the boom arrived about six years ago or making new ones. Some kept side jobs all along or squirreled away money, remembering how suddenly prospects can change.

That's one way that life here differs from many other places where an economic downturn could be a crisis. Folks here know it's wise to have a backup plan. They hunker down and make do. And they believe it's only a matter of time before oil booms again.

"You just ride the waves up and down," said Ponca City Mayor Homer Nicholson.

Ponca City was founded during an 1893 land run and was known mainly for a Wild West show staged at an enormous cattle ranch. Then in 1911, Ernest "E.W." Marland struck oil and transformed the town with mansions, Spanish architecture and a refinery that's now owned by Phillips 66.

Since then, there have been industry highs and lows, fortunes made and lost. Booms in the 1920s, '50s, and '80s were followed by declines. The bust in the mid-1980s was especially deep, with crude prices falling almost 70 percent in four months. Over the years, layoffs at the local refinery reduced employment from 5,000 to about 800.

Still, the latest boom, fueled by horizontal hydraulic fracturing that enabled drillers to tap deep, previously inaccessible oil deposits, brought many back to the oil fields for a big payday.

"Welders could make $50 to $75 an hour," said longtime resident John Soderstrom, as he got a trim at Barney's barber shop.

Since prices began sliding last fall, about 10,000 Oklahoma oil and gas jobs have disappeared, down from a November 2014 peak of 63,000. More than half the 200-plus drilling rigs operating last fall are idle.

But folks here seem to be weathering the slump.

September's 4.4 percent jobless rate is a few notches lower than it was a year ago, though higher than it was several months ago. Many unemployed workers who'd come from other states looking for work have gone home, said Pastor John Smith of the Alva Wesleyan Church, which runs a food pantry in Alva, about 90 minutes west of Ponca City.

"Those families were the ones we helped, even before the layoffs," he said.

Local oilfield workers are taking lower-paying or multiple jobs. Spouses who might have stayed home are going to work.

Brian Cullen, 24, who was laid off in May from an oilfield job where he earned more than $175,000 last year, began selling cars in Oklahoma City earning "substantially less."

Cullen said he heeded the advice of veteran oilfield workers to save money "because the oilfield won't last forever."

If, a year from now, he said, "I'm not making more and still eating away my savings, then it will be getting to the point of starting to worry about things."

Nicholson, the Ponca City mayor who worked at the refinery for 38 years before retiring in 2003, said his hedge was going to auctioneer and real estate school and starting a side business that he still runs.

But some who didn't prepare are struggling.

"When it's boom time and they're making good money, they're able to buy houses and trucks," said Brady Mills, who leads oil and gas job-training classes at High Plains Technology Center in Woodward, Oklahoma. Now, with the bust, "it does put them in a really big bind. I've seen it my whole life."

Tulsa-area oil and gas broker Bruce Blevins may file for bankruptcy if business doesn't turn around. Last year, he had six employees and 25 contractors. Now it's just him and two contractors. With no work for months, he's depleted his savings and cashed in part of his 401(k).

"It's a tenuous situation," he said, adding that many brokers have left oil to pursue sales, insurance or paralegal work. He knows one with a cattle ranch, another with rental houses.

"It will turn around eventually," said Blevins, 60. "The question is when."

Ponca City, like many other cities, has seen a decline in sales tax revenue, but officials built a rainy day fund exceeding 10 percent of the budget. They're also trying to diversify the business base, which includes a tractor supply store, industrial air conditioning manufacturer and a company that refurbishes aircraft parts. Businesses that serve the oil industry are branching out and "not putting all their eggs in one basket," said David Myers, executive director of the Ponca City Development Authority.

Despite the bust, Ponca City's — and Oklahoma's — love affair with oil will not end anytime soon.

"For those of us in this region, oil is good," Nicholson said. "We like oil and gas and energy because it has made a lot of people rich."