The flames could be seen for miles after erupting Friday afternoon in a farm field south of Bakersfield. 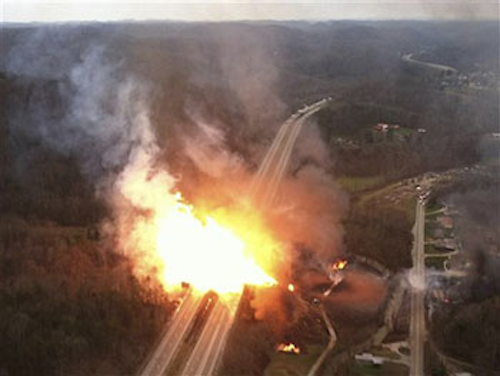 BAKERSFIELD, Calif. (AP) — A heavy equipment operator was killed after puncturing a natural gas line in Central California, creating an explosion and 200-foot-high plumes of flame that destroyed a nearby home, authorities said.

The flames could be seen for miles after erupting Friday afternoon in a farm field south of Bakersfield.

"My husband was driving home from work. He actually had to turn around because he could feel the heat from the fire," Bakersfield resident Kristin Morgan told KGET-TV.

Two people were injured at the house that was destroyed but a child escaped injury.

"The fire burned so intensely," Kern County fire Capt. Tom Ellison said. "Everything was gone. It was black."

The injured people received second- and third-degree burns over 20 to 30 percent of their bodies, Hall Ambulance told KGET-TV.

The Pacific Gas and Electric Co. line was about 12 feet underground when it was struck by the heavy machinery around 3:30 p.m., Ellison said.

It was unclear what kind of work was being done.

Video from drivers on nearby roads showed two enormous horns of fire flaring into the sky.

Ellison said he could see the flames from six miles away.

The gas line was quickly shut down and the fire was out by 4:30 p.m., PG&E spokesman Jeff Smith said.

The line was last inspected earlier this week, Smith said.

PG&E had been previously notified of work taking place near the pipeline but the notice had expired and there was no current notice, Smith said.

No PG&E employees were involved in work that caused the fire and none were injured, Smith said.